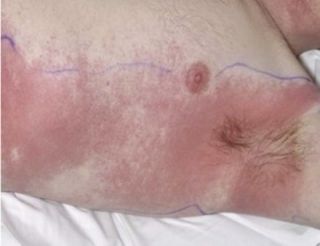 Baboon syndrome is a rare rash that appears on the buttocks, but can also appear in the armpits and other areas too.
(Image: © BMJ Case Reports)

A 40-year-old man with a sore throat and fever was diagnosed with tonsillitis, and was prescribed penicillin, a common antibiotic. But several days later, the man developed a rash over his armpits, groin and buttocks — an unusual condition known as "baboon syndrome."

The condition, more formally called symmetrical drug-related intertriginous and flexural exanthema (SDRIFE), is known as baboon syndrome because the rash on the patient's buttocks resembles the red hindquarters of some monkeys.

Because doctors often prescribe penicillin antibiotics to treat tonsillitis and other bacterial infections, it is important to be aware that baboon syndrome is one of the medication's possible side effects, wrote the researchers who reported the man's case online Nov. 28 in the journal BMJ Case Reports.

The condition is usually caused by an allergic reaction to penicillin drugs, but can also be caused by exposure to mercury or nickel, said Dr. Andreas Bircher, a dermatologist at University Hospital of Basel in Switzerland. (He was not involved in the study but has reported other cases of baboon syndrome.)

In the present case, during the man's initial examination, he had enlarged and inflamed tonsils, according to the physicians at the NHS Lothian hospital in the United Kingdom who reported the case. His regular doctor had prescribed penicillin for him two days earlier, but the patient became unable to swallow. [8 Strange Signs You're Having an Allergic Reaction]

The emergency-department doctor who saw the man started him on a course of intravenous benzylpenicillin (a different type than the oral penicillin) four times a day and gave him a single dose of intravenous dexamethasone, a steroid medication used to treat inflammation.

By the next day, the patient had developed a rash over his groins and inner elbow. Assuming it was a reaction to the penicillin, the doctor changed his antibiotic to clarithromycin (which is in a different class of antibiotics).

On the third day after being seen at the hospital, the patient's throat was much better, and he was able to swallow liquids and soft foods, but his rash had spread and become painful. At that point, the rash covered his armpits, buttocks, lower abdomen and upper thighs, and his groin showed signs of necrosis (dead tissue).

The doctors had to determine whether the patient was having a severe drug reaction, which would get better on its own, or a dangerous infection of flesh-eating bacteria (necrotizing fasciitis), which would require immediate removal of the dead or infected tissue.

The team started the patient on non-penicillin broad-spectrum antibiotics, which act against a range of bacteria, and took a tissue sample from his right groin. The sample tested negative for flesh-eating bacteria, so the patient was diagnosed with baboon syndrome.

"It's not a very common condition," Bircher told LiveScience. For unknown reasons, it's more prevalent in males, and usually seen in postpubescent people.

The patient stopped taking antibiotics, and used oral and topical steroids to treat his rash. He was discharged from the hospital 11 days after being admitted, and the rash disappeared.

"It's a true allergy," Bircher said. With steroid treatment, the rash usually fades within a week, but re-exposure to the drug or allergen can cause a relapse within one to two days, Bircher said.

Baboon syndrome typically appears a few hours to two days after a person takes an antibiotic. The syndrome rarely affects small children, but cases have been reported in an 18-month-old and a 5-year-old, the researchers noted in their case report. Recovery can sometimes take up to three weeks.

Exposure to penicillin, nickel or mercury are the most common causes of the syndrome, but it has also been linked to certain heartburn drugs, biological agents and chemotherapy.