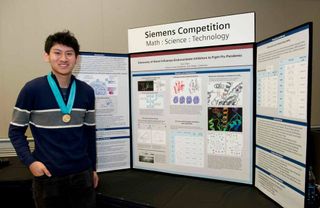 Research on drugs to combat a flu pandemic and on plants' resistance to ozone claimed top honors in the 2013 Siemens Competition in Math, Science and Technology.

A student from California and a team of three students from New York took home $100,000 scholarships for the two studies, respectively, from the Siemens Foundation, which announced the contest winners today (Dec. 10) in Washington, D.C.

High-school senior Eric Chen of Canyon Crest Academy in San Diego, Calif., won the individual category for his discovery of powerful influenza enzyme inhibitors, which could be used to develop anti-flu drugs. Priyanka Wadgaonkar, Zainab Mahmood and JiaWen Pei from George W. Hewlett High School in Hewlett, N.Y., shared the $100,000 prize in the group category for their work on ozone resistance in plants. [In Photos: 2013 Siemens Science Competition Finalists]

"These students represent the future of our competitive global workforce and will propel our nation toward continued economic growth and success," David Etzwiler, CEO of the Siemens Foundation, said in a statement. "We look forward to seeing their future accomplishments in college and beyond."

A total of 20 students who won regional competitions in November — six individuals and six teams — took part in the finals this past weekend at The George Washington University in Washington, D.C. They presented their work to a panel of judges consisting of renowned scientists and mathematicians. The winners join an elite group of just 14 individual and 14 team winners from past years. Siemens has held the competition since 1998.

Chen, the winning individual, used a combination of computer modeling and lab experiments to screen more than 100,000 drugs in order to identify a few that effectively blocked influenza viruses. The work could lead to the development of anti-flu drugs to protect against future flu pandemics.

Chen said the 2009 swine flu outbreak in his hometown of San Diego inspired him to pursue flu research. He won the Google Science Fair Grand Prize and was a finalist at the Intel International Science and Engineering Fair this year for the same work on influenza.

The winning team, from Hewlett, N.Y., characterized the gene for a protein (a building block of cells) that confers resistance against ozone pollution, in ferns. Ground-level ozone causes more damage to plants than all other air pollutants combined, according to the United States Department of Agriculture. The resistance gene, which evolved early on in plants, could be used to protect important crops from ozone, drought and soil salinity, which cost billions of dollars in damage each year.

Team member Wadgaonkar of Woodmere, N.Y., said her parents' work in cell biology and gastroenterology inspired her interest in science, and she hopes to become an emergency room doctor some day.

Teammate Mahmood of Hewlett, N.Y., is a member of the National Honor Society, a Euro Challenge Finalist and recipient of the United States Army Award. She hopes to pursue a career in engineering.

The third team member, Pei of Valley Stream, N.Y., is also a member of the National Honor Society, in addition to the Foreign Language Honor Society, chorus and orchestra. She hopes to become a physician.

The Siemens Foundation awarded smaller scholarships ranging from $10,000 to $50,000 to the remaining finalists.

The Siemens Competition, a leading science research competition for high-school students administered by the College Board, was launched in 1998. More than 2,400 students, a record number, registered for the competition this year, submitting 1,599 projects. The foundation selected 331 semifinalists, 100 regional finalists and 20 national finalists.