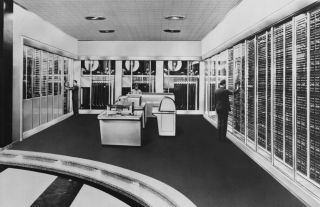 Does anyone remember these early versions of a computer? Today is the start of Computer Science Education Week with more than 34,000 events planned in 167 countries.

It also would have been the 107th birthday of computer pioneer Grace Hopper, who worked on machines like the one in the image above to create COBOL (Common Business-Oriented Language), the program that allows computer to communicate through language as well as numbers.

Oddly enough, Hopper is credited with coining the term "bug in the system," because of the time she actually found a 2-inch-long moth inside an experimental machine called the Mark I. Hopper; she extracted the moth from the machine's circuit board and taped it into her logbook writing, "when anything went wrong with a computer, we said it had bugs in it."