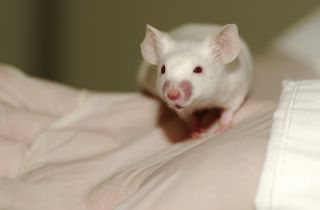 Mice trained to fear a specific scent pass on that knowledge to their babies and grandbabies through changes to their DNA.
(Image: © Floris Slooff, Shutterstock)

The children of parents who lived through the Dutch famine of 1944 had low birth weights and suffered health problems throughout their lives, and their own children were smaller and plagued by poor health as well, studies have shown. Now, new research in mice reveals how experience can be passed down through generations due to changes in DNA.

Scientists trained mice to associate the scent of cherry blossoms with the fear of receiving an electric shock, and found that the mice's pups and grandpups were more sensitive to the scent, even though they didn't receive the shock training. The mice appear to have inherited the fear knowledge through modifications to their genetic code.

These modifications, which can dial the expression of particular genes up or down, are known as epigenetic mechanisms. Certain environments or experiences can trigger the attachment of chemical markers to a gene that controls whether that gene will be used to make proteins (the building blocks of the body's tissues). [The Top 10 Worst Hereditary Conditions]

"Depending on the environment an organism finds itself in, that gene might be turned on or off," study researcher Brian Dias of Emory University School of Medicine in Atlanta,  told LiveScience.  "It behooves ancestors to inform their offspring that a particular environment was a negative environment for them," Dias said.

Dias and colleague Dr. Kerry Ressler exposed mice to a cherry blossom scent and gave them electric foot shocks, so that the animals learned to associate the scent with the fear of being shocked. Other mice were exposed to a neutral scent or no scent.

The first-generation offspring were more sensitive to the cherry scent — they could detect the scent at very low levels and avoided spending a lot of time near the odor. What's more, the next generation of offspring showed the same odor sensitivity, according to results of the study, detailed Dec. 2 in the journal Nature Neuroscience.

The researchers also measured how the scent fear affected brain anatomy, using a method that dyes odor neurons blue. They counted these blue neurons and traced their origin.

The first- and second-generation offspring of the mice trained to fear the cherry scent had greater amounts of a known chemical receptor for the cherry blossom odor than offspring of mice exposed to a neutral scent, and also had enlarged brain areas devoted to those receptors.

In fact, even mice conceived from the sperm of a cherry odor-fearing mouse displayed the same sensitivity to the scent, the researchers found, suggesting the scent knowledge wasn't something the mice learned from their parents.

Epigenetic mechanisms appear to explain how the offspring of mice trained to fear a particular scent might inherit sensitivity to that scent.

"These types of results are encouraging, as they suggest that transgenerational inheritance exists and is mediated by epigenetics," geneticist Wolf Reik of Babraham Institute in England said in a statement. "But more careful mechanistic study of animal models is needed before extrapolating such findings to humans," added Reik, who was not involved in the study.

Some epigenetic mechanisms have been documented in humans, in fact. For example, other researchers have shown that babies who were in their mothers' wombs during the 9/11 terrorist attacks had lower levels of the hormone cortisol, a hallmark of Post-Traumatic Stress Disorder (PTSD).

Dias said these studies suggest that "the dichotomy between nature versus nurture is a false one — it's somewhere in the middle."