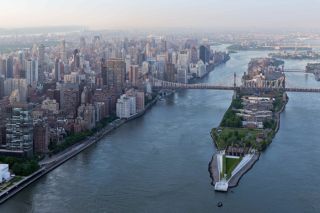 The Franklin D. Roosevelt Four Freedoms Park, at the very southern tip of Roosevelt Island in New York's East River, is a lovely, solemn tribute — not only to the president who inspired it, but to the architect Louis Kahn, who came up with its elegant, cerebral design. It is symmetrical in shape, reminiscent of the bow of a ship, with majestic views of the New York City skyline.

Kahn designed the park just months before he died in 1974. It was only finished in 2012 after myriad budget issues, and I'll cheerfully admit I'm biased in its favor because I have colleagues who did pro bono communications work for it.

I tell its story now, though, because of one knock-you-over fact I learned about its construction. The park is almost exactly as Kahn envisioned it 40 years ago, down to the placement of trees and the inch-wide spaces between the polished faces of its granite blocks. But there's one very visible exception: The whole park is 15 inches (38 centimeters) higher than Kahn originally planned — a concession to the risk of climate change that was not expected when he did his work.

"I would have raised it a lot more," said Gina Pollara, executive director of the park. She said she wanted to plan, not just for possible rises in the level of the East River as oceans warm, but for any other risks engineers could reasonably anticipate. "I was asked, 'What do you want the service life of the park to be?'" she told me. "And I said, '100 years.'"

Whatever you may think about climate change, the design of the FDR Four Freedoms Park reflects a changed world — one everyone will have to navigate in the coming years.

While global warming has been debated in Washington for decades, and international bodies have been all but paralyzed (just look at last month's climate-change conference in Warsaw, for example), some local governments — New York's among them — have been busy. Mayor Michael Bloomberg laid out a $20 billion plan to make the city more "resilient" in a warmer, and perhaps stormier, world by increasing energy efficiency, building seawalls and fortifying the city's low-lying neighborhoods against major storms like Hurricane Sandy. Other cities, such as Chicago and Miami, have been working on their own plans.

"Of the things that we're going to notice most in New York City as a direct consequence, the first is sea-level rise," said Gavin Schmidt, a climatologist at NASA's Goddard Institute for Space Studies in New York, at a roundtable RLM Finsburyheld in partnership with the New York Hall of Science. "Our food supplies, our water sources from the Catskills — we're going to see effects because we haven't adapted our own culture to the change in climate."

Global warming has been the subject of ugly argument, one in which personal attack often takes the place of informed discussion. People accuse one another of being "alarmists" or "deniers." The Bloomberg administration, especially in the aftermath of Sandy, sent a different message: Money spent now to make the city more resilient will pay off in future damage that does not occur.

"What are the steps that we can take that are cost-effective?" said Cas Holloway, New York's deputy mayor for operations, who was one of the organizers of the Bloomberg administration's plan. In November, Bloomberg signed six new climate-mitigation bills into law, mandating, among other things, that electrical systems in new buildings be placed on higher floors to protect against flooding.

But someone, of course, will need to come up with the up-front capital. That's an unacceptable proposition for many people, and they will not easily be comforted. Yale law professor Dan Kahan has written extensively about "cultural cognition" — the refusal by people to accept new evidence that contradicts long-held beliefs — using climate change as his prime example. If you're an "alarmist" or a "denier," you are unlikely to be lured into the other camp.

Given the sterility of the debate, the Bloomberg administration said its actions would prove valuable for other reasons, whether or not one believes climate change is truly serious. Is energy efficiency an environmental mantra? Sure, but it can also reduce a company's utility bills. Will higher seawalls protect cities against climate change? Perhaps, said Holloway, but they may also pay for themselves when a storm hits, regardless of whether anyone can say it was worsened by global warming.

All of this leads back to Four Freedoms Park, where Pollara said her team tried to plan for earthquakes, erosion, heat waves and winter storms — all sorts of events that might come up over the course of a century. Climate change was just one more item on the list. Raising the park floor as a hedge against sea-level rise actually turned out to be a money saver, because construction workers needed to truck away less dirt when they leveled the site.

"Our structural engineer designed the park for a 24-foot (7-meter) wave from the East River," Pollara said. "We teased him about it at the time. Well, we got a 12-foot wave during Hurricane Sandy." Congress allocated $50.5 billion for recovery efforts in the disaster zone, but the park — right in the middle of it all — came through fine.