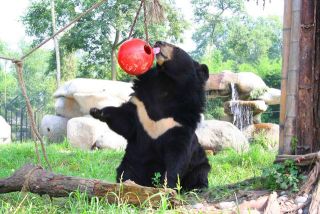 Abuse and death of animals in Hollywood continues despite supposed monitoring by the American Humane Association (AHA). A recent essay in the Hollywood Reporter makes it clear that the AHA isn't doing its job and the phrase "No Animals Were Harmed" that they rubber-stamp at the end of films is meaningless. Horses are killed, dogs beaten and goats drown despite AHA monitoring.

I've written a number of essays about the continued abuse and death of nonhuman animals (animals) in Hollywood, and just this week I was informed of the important Hollywood Reporter essay, "No Animals Were Harmed," by Gary Baum.

As says Baum, "On Disney's "The Chronicles of Narnia: Prince Caspian," horses were repeatedly pulled for injuries — internal AHA notes from a single day show that 14 were out of commission at once. Yet it received the 'No Animals Were Harmed' credit because, the organization now explains, none of the injuries were serious or due to "intentional harm.'"

Baum's essay, with illustrations by Jeremy Enecio, is well-written, but remains a difficult and heart-wrenching read because it is very clear that the inexcusable and brutal abuse and death of animals continues to occur despite supposed oversight by the AHA.

Representatives of the AHA continue to deny that no animals were harmed in the making of films, but according to Baum, others who actually were on site have witnessed the horrific abuse of animal actors.

Here are some snippets from the Hollywood Reporter essay, and it seems clear that extreme abuse took place despite the presence of AHA monitors.

"LAST WEEK WE ALMOST F—ING KILLED KING IN THE WATER TANK." In "The Life of Pi", King, a Bengal tiger, was used when a digital alternative didn't work. According to Baum's piece, AHA monitor Gina Johnson said, "This one take with him just went really bad and he got lost trying to swim to the side ... Damn near drowned."

Baum writes, "King's trainer eventually snagged him with a catch rope and dragged him to one side of the tank, where he scrambled out to safety. 'I think this goes without saying but DON'T MENTION IT TO ANYONE, ESPECIALLY THE OFFICE!,' Johnson continued in the email, obtained by The Hollywood Reporter. 'I have downplayed the f— out of it.'"

"A Husky dog was punched repeatedly in its diaphragm on Disney's 2006 Antarctic sledding movie Eight Below, starring Paul Walker, and a chipmunk was fatally squashed in Paramount's 2006 Matthew McConaughey-Sarah Jessica Parker romantic comedy Failure to Launch. In 2003, the AHA chose not to publicly speak of the dozens of dead fish and squid that washed up on shore over four days during the filming of Disney's Pirates of the Caribbean: The Curse of the Black Pearl. Crew members had taken no precautions to protect marine life when they set off special-effects explosions in the ocean, according to the AHA rep on set.

"And the list goes on: An elderly giraffe died on Sony's 2011 Zookeeper set and dogs suffering from bloat and cancer died during the production of New Regency's Marmaduke and The Weinstein Co.'s Our Idiot Brother, respectively (an AHA spokesman confirms the dogs had bloat and says the cancer "was not work-related"). In March, a 5-foot-long shark died after being placed in a small inflatable pool during a Kmart commercial shoot in Van Nuys."

One more sickening incident is worth highlighting although all of the instances of abuse are inexcusable and deserve widespread public attention. Baum writes, "The symbiotic relationship between the two organizations is important in light of an incident that occurred June 9, 2010, during the filming of Courage. That day, a horse named Glass — known for his gentle demeanor, one blue eye and a distinctive white blaze of mane set against a shimmering black coat — was fatally injured when a 'runaway' wagon really did lose control and the carriage's crossbar broke (think of a pencil snapping), impaling the animal's left hindquarter. 'He then went into shock from extreme blood loss and the vet decided it would be more humane to euthanize him than allow him to suffer,' according to an internal AHA report."

It is worth revisiting the topic of animal abuse in Hollywood and to protest it until it stops.

The last sentence of Mr. Baum's essay nicely summarizes what is still happening. "'The moral compass of the entire place is off the hook,' says one AHA employee. Adds another: 'We've been hopeful for change, but not this. It's not changing. It's getting worse.'"

End the use of animals in film

One way to stop the continued abuse and death of animals in film is to stop using them once and for all. A wonderful example of what can be done is the movie "Rise of the Planet of the Apes"Using the latest technology to produce computer-generated apes, Caesar, the star of this movie, looks and acts like a real chimpanzee and it's wonderful that not a single chimpanzee had to be used to show viewers what it's like to be a chimpanzee. Caesar's various and wide-ranging emotional states are beautifully portrayed, and at times I asked myself what was this chimpanzee feeling about being used this way, only to remind myself that Caesar wasn't a real animal.

You can voice your opinion by contacting the Academy of Television Arts and Sciences at 5220 Lankershim Blvd North Hollywood, California 91601; telephone: (818) 754-2800) or you can email them here. You can also contact movie studios and email the American Humane Association at info@americanhumane.org. You can also choose to watch films in which animals were not used.

The animals who are used in film do not have a choice, but audiences do — and we can easily make a huge difference by letting those who continue to abuse animals — or look the other way, or play the blaming game and shun responsibility — know that we do not like what they do and that we will not watch their films.

It is really worthwhile reading Baum's essay carefully to learn the excuses the AHA offers for the horrific and brutal deaths of animals in film. And, you can do something about it, so please do. Let's make it clear that rubber-stamping "No Animals Were Harmed" will no longer work.

Bekoff's most recent Op-Ed was "Speciesism Is Bad News for Animals." This article was adapted from "'No Animals Were Harmed,' Not So Even with AHA 'Oversight'" in Psychology Today. The views expressed are those of the author and do not necessarily reflect the views of the publisher. This version of the article was originally published on LiveScience.