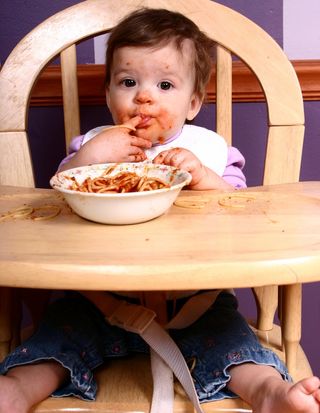 Getting sick of scraping pureed sweet potato out of the crevices of your toddler's high chair? Here's a little bit of motivation: Kids who get messy in their high chairs learn certain types of words better.

Little ones grasp the words for ooey-gooey stuff better when they smear it, mush it and throw it around from their high chairs, new research finds. The study reveals that context is key for toddlers learning new things.

"If you expose them to these things when they’re in a high chair, they do better," study researcher Larissa Samuelson, a psychologist at the University of Iowa, said in a statement. "They're familiar with the setting and that helps them remember and use what they already know about nonsolids." [That's Incredible! 9 Brainy Baby Abilities]

Babies and toddlers learn the words for solid objects like dogs and books and Cheerios faster than they learn words for semi-solids or liquids, like milk or glue. The reason seems to be that nonsolids aren't as consistent as solids. Dogs stay dog-shaped, but glue can be in a bottle, in a blot on a piece of paper, or smeared all over the walls and floor.

But Samuelson and her colleagues found that by strapping kids into their high chairs, the scientists could improve tots' learning of words for nonsolids. The researchers experimented by giving 16-month-olds 14 nonsolids, including applesauce, pudding, soup and juice. Some of the kids got to play with the food in their high chairs and others sat at a table.

When presenting each object, the researchers described it with a made-up word, such as "dax" or "kiv." After allowing the child to explore the nonsolid for a minute, the researchers showed them the same food in a different container and asked them to say the name. This required the toddlers to go beyond size and shape to identify the substances.

Kids who got down and dirty exploring the substances were better at identifying them later. So were kids who got to play in their high chairs instead of at the table.

"It turns out that being in a high chair makes it more likely you'll get messy, because kids know they can get messy there," Samuelson said.

So all that smearing and throwing and poking that gets food everywhere but into a child's mouth serves a purpose, after all, Samuelson said.

"It may look like your child is playing in the high chair, throwing things on the ground, and they may be doing that, but they are getting information out of (those actions)," she said. "And, it turns out, they can use that information later. That's what the high chair did. Playing with these foods there actually helped these children in the lab, and they learned the names better."

The researchers report their work today (Dec. 2) in the journal Developmental Science.