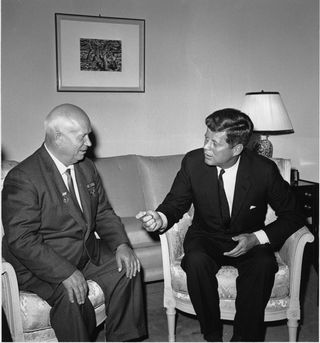 John F. Kennedy surviving his assassination has always been an irresistible twist for authors of alternate histories. Some of the best writers of the past 50 years have tackled this plot device since that fateful day in Dallas on Nov. 22, 1963. Some are fanciful, such as the 1992 short story collection "Alternate Kennedys," which sent the clan to Hollywood. Others take a serious turn, reversing the 1960s' amazing progress in civil rights.

Here are five intriguing ways history may have changed if Kennedy had survived the assassination attempt, or if gunman Lee Harvey Oswald had never taken the shot.

What if JFK had lived through the assassination attempt on Nov. 22, 1963? There may never have been a Warren Commission to investigate the crime, and the wealth of conspiracy theories that followed may have never arisen. But there would have still been investigations. [The 10 Wildest Conspiracy Theories]

And in the alternate history presented in Bryce Zabel's novel, "Surrounded by Enemies: What If Kennedy Survived Dallas?" (Publish Green, 2013), those investigations threaten Kennedy's ability to win re-election by revealing his personal and political secrets. Those include his affairs and ties to the mob. In Zabel's novel, the revelations trigger an impeachment battle.

Tensions were already escalating in Vietnam in 1963. Just a few months before Kennedy was killed, he supported a coup that ended with the death of South Vietnamese president Ngo Dinh Diem. In the documentary film project "Virtual JFK," historians suggest Kennedy would have pulled out of Vietnam, resisting pressure to escalate the war.

Even so, after Kennedy's death, his brother Robert told reporters that JFK had no intention of pulling out of Vietnam; historians, as well, aren't sure how the Vietnam War would have concluded with Kennedy in charge.

Historians describe the trouble Kennedy would have faced in building consensus in Congress had he continued on for another term. Rather, Lyndon B. Johnson gets credit for pushing through the landmark civil rights and poverty-busting legislation of the 1960s. In the novel "11/22/1963" (Gallery Books, 2012), by Stephen King, a high-school English teacher travels through a time portal to foil Lee Harvey Oswald's assassination attempt. When the time traveler returns to the present, he discovers the 1964 Civil Rights Act never passed.

John F. Kennedy won election by preying on fears of nuclear war, some have argued. But just before his death, the president pushed for a limited ban on nuclear weapons. In the book "If Kennedy Lived: An Alternate History" (Putnam Adult, 2013), by Jeff Greenfield, the author suggests Kennedy would have worked with Soviet leader Nikita Khrushchev to reduce the world's nuclear weapons arsenal.

Would there be people on Mars by now if Kennedy had lived beyond 1963? In the science fiction novel "Voyage" (Harper Collins, 2011), by Stephen Baxter, the United States lands people on Mars in 1986, after Kennedy survives his assassination attempt. But JFK only serves as inspiration — it's Nixon who approves the Mars mission. Another twist: All of the Apollo missions beyond Apollo 14 were cancelled. Historians have focused more on the outcome of the lunar program than a possible Mars launch had Kennedy lived. A few think the budding détente between Kennedy and Khrushchev could have even lead to a joint space program.