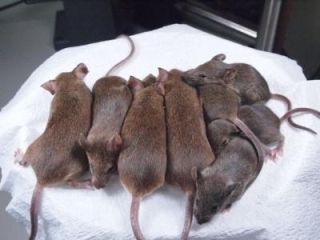 The microbiota in mother mice is passed on to their babies, where it may affect brain development.
(Image: © RIKEN)

SAN DIEGO — Mothers pass on more than just love to their babies: As infants pass through the birth canal, they also get a healthy dose of mom's bacteria.

Now, research shows that mother mice that experienced stress before giving birth exhibited changes in the bacteria of their vaginas, affecting the microbes they passed on to their offspring. The range of bacteria, or microbiome, that young mice are exposed to influences their brain development, the researchers said.

For comparison, another group of pregnant females was not exposed to the stress. After all of the mice gave birth, the scientists genetically sequenced the bacteria in the mothers' vaginas and the offspring's guts.

"Lactobacillus has been shown to be related to all kinds of processes in the gut related to brain development," Bale told LiveScience.

Bale and her colleagues also measured the offspring mice's blood levels of molecules that are building blocks for important brain chemicals, including histidine, a precursor to the critical brain signaling chemical histamine.

In previous mouse studies, Bale and her colleagues showed that stressed mother mice give birth to offspring that display psychiatric problems.

However, the findings seem to apply only to male offspring, Bale noted, explaining that this may have something to do with the difference in genes expressed by males and females.

"It's some of the coolest stuff I've seen," said Jeffrey Blaustein of the University of Massachusetts, Amherst, who was not involved in the research. "A lot of us are thinking about how the vaginal microbiome might influence the brain, and they've already started on it," Blaustein, who is the former editor-in-chief of the journal Endocrinology, told LiveScience.

In people, some research suggests that babies born by Caesarian section may be missing out on a healthy dose of their mother's vaginal bacteria. If Bale's finding is also true of humans, it would suggest that maternal stress could have important consequences for early infant brain development.