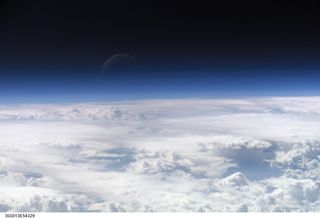 An astronaut photo of the top of Earth's atmosphere where the blue hue of the sky fades into the blackness of space.
(Image: © NASA)

Organisms could live more than 30 miles (50 kilometers) above Earth's surface, in an atmospheric zone known as the stratopause, scientists say.

At those heights in the atmosphere, air pressure is only a tiny fraction of what it is at sea level, and temperatures hover around freezing (32 degrees Fahrenheit, or 0 degrees Celsius). But this temperature, which is warmer than that of the air below and above the stratopause, creates a potential home for microbial life that could have once been lofted up by storms, volcanic eruptions, high-altitude aircraft and other human ventures far above Earth.

"We are trying to figure out what is the upper limit of the active biosphere in the atmosphere," Andrew Schuerger, a plant pathologist at the University of Florida, told LiveScience. ("Biosphere" is a term scientists use to describe the zone on, in and around Earth that supports life.) [Strangest Places Where Life Is Found on Earth]

Although some lab tests suggest organisms may be capable of growing at this altitude, the technology necessary to attempt to collect them is still being developed.

Some of Schuerger’s work focuses on a more distant and foreign environment: the surface of Mars. He uses the Mars Simulation Chamber in his lab at the Kennedy Space Center in Cape Canaveral, Fla., to test microbes' ability to survive and grow in the cold, carbon-dioxide-dominated, low-pressure atmospheric conditions on the surface of the Red Planet.

Two of these conditions — the temperature and low atmospheric pressure — resemble those high in Earth's atmosphere.

"If microorganisms can survive, grow and replicate at all under Martian conditions, it is very plausible they can [do so] near the stratopause," Schuerger said at the ScienceWriters2013 conference on Nov. 4. Microbes are known to be abundant lower down in Earth's atmosphere.

He and others have found that some bacteria — including a common microbe called Serratia liquefaciens, as well as species of Carnobacterium recovered from the Siberian permafrost — were capable of growing at 32 degrees F (0 degrees C), in a carbon-dioxide-rich, oxygen-free atmosphere and at a low atmospheric pressure of 7 millibars. (Atmospheric pressure at sea level is, on average, 1,013 millibars.)

By comparison, conditions in the stratopause are more forgiving because oxygen is available. Otherwise, the temperature and pressure conditions are similar.

The stratopause is warmer, or at least less cold, than the air just below it. Traveling up from the planet's surface, temperatures decline at higher altitudes, reaching about minus 76 degrees F (minus 60 degrees C), before solar radiation absorbed by the ozone layer and small particles known as aerosols begin warming the stratosphere. Temperatures reach the freezing point (the highest they go) at the stratopause, the area between the stratosphere and the next layer up, the mesosphere, where temperatures decline once again. [Infographic: Earth's Atmosphere Top to Bottom]

Using an ER-2 aircraft, NASA's version of a U-2 spy plane, Schuerger and his colleagues have collected bacteria and fungi from as high as 12 miles (20 km) above Earth's surface. Meanwhile, the highest confirmed recovery of viable microbes took place at 25 miles (41 km), said Schuerger, who hopes to get microbes from higher up in the stratopause one day.

"We are waiting on the technology," he told LiveScience's OurAmazingPlanet.

NASA is working on a balloon that could do the job; it is expected to fly in 2016. Another possibility is a collection system called the Dust at Altitude Recovery Technology (DART), which Schuerger and his colleagues are testing at a lower altitude. An F-104 jet could carry the DART to the stratopause and higher, but the pilots would need pressure suits that have not yet been developed, he said.

In the immediate future, the researchers plan to use the DART to collect microbes, including those that might cause disease, at lower altitudes.

"Whatever we find — whatever it is — we will test the recovered bacteria and fungi to see if they are able to carry out growth," he said.

These tests, like the others performed in the Mars simulator, are important because the researchers need to know that the microbes from high in the atmosphere can take in water and the nutrients necessary to carry out metabolism, as well as other activities that ultimately allow them to generate new cells.

If the simulations reveal that microbes found high in the atmosphere — potentially, even the stratopause — cannot grow, then these altitudes would not be part of the active biosphere. In this case, the active biosphere would most likely end a few miles above the surface of the Earth, Schuerger said.

However, the Mars simulations did not account for one important factor: Ultraviolet light (UV) exposure. The stratopause is above the ozone layer, which prevents much of the DNA-damaging UV radiation emitted by the sun from reaching Earth's surface, so UV levels that high up might prevent microbes from surviving or growing, he said.