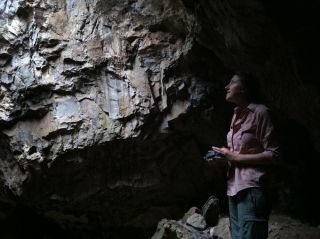 An expedition to probe the deep recesses of a cave that may contain fossilized specimens of early humans is currently underway in South Africa.

An international team of paleoanthropologists is exploring the Rising Star Cave at a site in South Africa dubbed the Cradle of Humankind, which is located roughly 25 miles (40 kilometers) north of Johannesburg. The Cradle of Humankind is one of the richest fossil sites in Africa, and was inscribed as a UNESCO World Heritage Site in 1999.

Over the weekend, researchers descended into the narrow cave to comb for fossils of ancient relatives to the human lineage. The scientists found several hominid fossils, including a mandible, which forms part of the lower jaw.

"The exploration team leader, Pedro Boshoff, and his two assistants, Steve Tucker and Rick Hunter, were able to access a chamber deep underground that is nearly impossible to get to, where they have found some significant fossils on the surface of the cave floor," Berger said in a statement. [Au. Sediba Gallery: Anatomy of Humanity's Closest Relative]

The researchers will now retrieve the hominid fossils, and this work will involve squeezing through a small opening that measures only about 7 inches (18 centimeters) across, then descending roughly 100 feet (30 meters) underground. Berger and his colleagues will begin analyzing the specimens once the fossils are removed from the cave.

"We do not know as yet what species of hominin we have found, and we will not speculate," Berger said in a statement. "Our aim is to get the fossils out carefully, study them, compare them to other fossil material from around the world and then proceed to analyze and describe them."

The term "hominid" is used to describe ancestors to modern humans, or close relatives to early humans. The researchers are hoping to publish their findings from the Rising Star Cave expedition in late 2014, Berger added.

Berger previously took part in the discovery of remarkably well-preserved partial skeletons of the extinct species Australopithecus sediba at a separate site, called Malapa, in the Cradle of Humankind. Members of this species had humanlike faces, but longer arms and smaller brains than do modern humans. Researchers think these hominids may be immediate ancestors of humanity.

The individuals — a juvenile male and an adult female — lived 2 million years ago, and their skeletons were found near the surface in the remains of a limestone cave system.