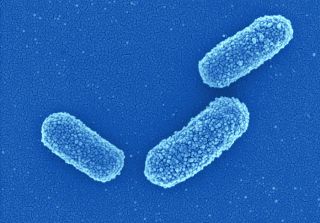 Recently, my colleagues and I at NSF International's Applied Research Center (ARC) discovered a new bacterium, Klebsiella michiganensis, lurking on a toothbrush holder. This unique coliform bacterium is a member of the same family as E. coli, a species typically found in human intestines and fecal matter. Some bacteria in the genus Klebsiella are pathogenic and drug-resistant, including K. pneumonia, which can cause pneumonia and respiratory tract and urinary tract infections.

K. michiganensis has a capsule structure with a slimy surface that helps it attach to mucus membranes and evade immune system responses, which may lead to infection because the bacterium is difficult to break down. Sticky bacteria like K. michiganensis also attract other bacteria that join together in communities to build biofilms, which are a common cause of persistent infections.

Biofilms (thin, slimy films of bacteria) can form on surfaces such as human and animal tissues, metal and plastic. Biofilms are more resistant to disinfection — and much more difficult to clean and remove from surfaces — than single (planktonic) bacteria. Biofilms are resilient because they consist of many different types of individual bacteria that literally stick together and release a viscous substance that forms a protective barrier around the entire group.

Our team discovered the new bacterium as part of a series of germ studies to investigate microbial hot spots in the home. These studies are part of NSF International's mission to protect public health and to clear up common misconceptions about where the highest concentration of germs are found in homes, schools and other environments.

One particular germ, found on a toothbrush holder, did not match any known bacterium ID. NSF International microbiologists used biochemical tests to identify the organism as a member of the Enterobacteriaceae family, but hired Accugenix Inc. — a company specializing in bacterial and fungal identification and strain typing of environmental isolates — to provide a specific genus and species identification. Using proprietary gene sequencing methods and an extensive database, Accugenix confirmed the bacterium was novel and placed it in the genus Klebsiella.

NSF International scientists conducted further genetic testing, determined it was indeed a unique species, and named the isolate Klebsiella michiganensis for the state in which it was discovered.

Researchers confirmed that no one in the household that submitted the toothbrush holder had recently been traveling or was sick, thus ruling out that the germ originated outside the United States or in a hospital setting. A potential source of the bacterium could be fecal matter that settled on the toothbrush holder (either from flushing the toilet with the lid open or from contact with pets). There, the bacterium grew in the warm, moist environment.

The discovery of K. michiganensis is an important reminder of why proper cleaning is essential. Finding this bacterium in a toothbrush holder is particularly concerning due to the possibility of fecal matter contamination on products used for oral care.

There are a number of steps one can take to clean and sanitize toothbrush holders as well as prevent germs from growing. Toothbrush holders should be washed with hot soapy water, or alternatively placed in the dishwasher, one to two times per week. It is also recommended to close the toilet lid before flushing to shield bathroom items against contamination from fecal bacteria vapor spray. Furthermore, frequent hand washing and disinfection of frequently touched surfaces will help prevent the spread of germs.

Of all the bathroom items NSF International scientists tested, the toothbrush holder had by far the most microorganisms — 3,318,477 per 1.55 square inches (10 square centimeters). The next germiest item, the bathroom faucet handle, had less than 1 percent of that amount at 28,068 germs per 1.55 sq. in. (10 sq. cm). The other items tested had even lower germ concentrations at 315 for the bathroom doorknob, 266 for the toilet seat, 46 for the toilet handle and 30 for the bathroom light switch. Of all toothbrush holders examined, 27 percent had coliforms, 64 percent had yeast or mold, and 14 percent had Staphylococcus.

What's important to remember is the science behind the study. Germs exist everywhere, and while not all germs are "bad," NSF International's goal is to educate consumers about how they can help keep their families healthy.

Under NSF International's ARC, our scientists also are working with industry and academia to develop and validate new types of household and commercial disinfection methods, such as ozone, nano-antimicrobials and ultraviolet light treatments. Such devices may result in eradication or reduction of pathogens from hard surfaces (such as a toothbrush holder) and in foods (such as lettuce and strawberries) that can hold elevated levels of microbes (including pathogens and spoilage organisms).