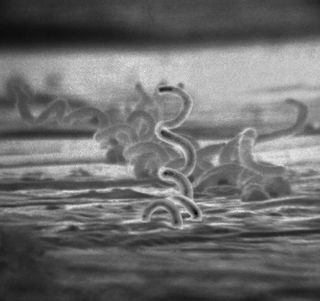 Syphilis has been infecting people for centuries, and many researchers have tried to pinpoint the part of the world where the bacterium that causes the disease first appeared, before spreading across the globe and becoming the international disease that it is today.

Yet, despite researchers delving into studying the disease — looking at it from the angles of history, politics, paleopathology and molecular chemistry — the origin of syphilis remains an enigma, say researchers who recently reviewed the literature about syphilis.

The main hypotheses about the origin of syphilis revolve around the voyages of Christopher Columbus to the New World. According to the "Columbian" theory, the crews of Columbus brought the disease from America to Europe when they returned home in 1492. Not long afterward, the first recorded epidemic of syphilis happened, during the French invasion of the Italian city of Naples in 1495.

However, critics of the Columbian theory claim that syphilis may have existed in Europe prior to Columbus' return, and the disease simply wasn't distinguished from other conditions such as leprosy until 1495.

Syphilis — a sexually transmitted disease that can damage the heart, brain, eyes and bones, and even cause death if untreated — first appears in the historical record in the 1496 writings of a man named Joseph Grünpeck. But it was the Italian physician and poet Girolamo Fracastoro who first used the term "syphilis" in 1530 in a Latin poem.

Fracastoro said that this "vulgar disease was born in the west of the Atlantic seas, over those unhappy, recently discovered edges," researchers Ismael Maatouk and Roy Moutran wrote in their article, published Oct. 25 in the Journal of Sexual Medicine.

"These attributions reflect the fact that people wanted to clear their responsibility for the dissemination of this rapid and unknown disease," the researchers said. [Top 10 Stigmatized Health Disorders]

Syphilis also had more than 50 appellations that corresponded to saints — including St. Job, St. Roch and St. Reine — believed to help heal the disease, the researchers said.

What is known about the etymology of the word "syphilis" goes back to a story that Fracastoro told in his book in 1530 about a Greek shepherd, Syphilus, who led a revolt against the god of the sun and suffered later from this disease, the researchers said. The majority of Renaissance authors used the term "syphilis" after Fracastoro had mentioned Syphilus's myth in his book.

Although the main hypotheses about the origins of syphilis focus on either an American or European origin, other possibilities exist. It was later recognized that different varieties of the disease existed, such as bejel, pinta and yaws, all caused by subspecies of the bacterium Treponema pallidum, which causes syphilis.

According to one theory, T. pallidum bacteria have existed since antiquity, infecting humans all along but giving rise to variable symptoms that prevented doctors from realizing it was one disease. The bacteria were detected in 1905. [7 Devastating Infectious Diseases]

Syphilis has four stages, each of which has different symptoms ranging from sores and skin rashes to blindness, paralysis and dementia. Symptoms of late-stage syphilis can appear 30 years after the early-stage symptoms have disappeared in an untreated person.

Paleopathologists have played a pivotal role in addressing the question surrounding the origin of syphilis, the researchers said. Syphilis and its related diseases leave distinct marks on the bones, allowing researchers to examine the remains of past generations.

Evidence from pre-Columbian sites in America shows a high rate of syphilis in young people, suggesting there may have been a nonsexually transmitted form of the disease, similar to today's yaws or bejel, the researchers said. It is possible that the responsible bacterium would have evolved once it arrived in Europe, under a new set of selective pressures and different climates.

"Perhaps it was the exposure to this novel host environment that resulted in the birth of the T. palladium subspecies that causes syphilis," the researchers said.

Today, syphilis is easy to cure in its early stages with antibiotics. However, it remains a global problem, infecting an estimated 12 million people each year, mostly through unsafe sexual practices.