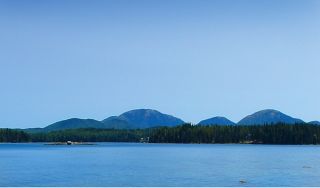 DENVER — Maine has supervolcanoes. Wait, Maine has volcanoes? Yes, and their eruptions could have been among the biggest ever on Earth, geoscientist Sheila Seaman reported here Tuesday (Oct. 29) at the Geological Society of America's annual meeting.

"Long before there were these things called supervolcanoes, we've known about giant, big, horrific silicic volcanic eruptions," said Seaman, of the University of Massachusetts at Amherst. The most massive of these blasts in recent history was Toba, which blew up an island in Indonesia 2.5 million years ago. The explosion heaved 700 cubic miles (2,800 cubic kilometers) of magma out of the Earth's crust.

Around 420 million years ago, a series of super-eruptions dropped thick piles of ash and lava fragments along the proto-East Coast. There are at least four volcanoes spread out along 100 miles (160 km) of Maine's coast, Seaman said. [Countdown: History's Most Destructive Volcanoes]

Since they formed, the ancient volcanic layers have been tilted up by tectonic forces, providing a top-to-bottom slice through a supervolcano. For example, Isle au Haut, part of Acadia National Park, exposes the heart of a volcano. "The whole magma chamber is lying on its side," Seaman said.

Building on years of geologic mapping and tectonic reconstructions by other researchers, Seaman has traced a direct connection between the cooled and crystallized magma chambers, called plutons, and their enormous ash deposits.

"The coast is so serene and so beautiful and has such a terrible, violent past," Seaman told LiveScience's OurAmazingPlanet.

Seaman thinks the super-eruptions struck between 424 million to 419 million years ago, in the Silurian period, after islands the size of Japan slammed into the eastern edge of Laurentia, the continental core of North America. Afterward, tectonic forces stretched and tore Earth's crust behind the collision zone, making space for magma to rise from the mantle, the layer beneath the crust.

She plans further work to better understand the conditions that caused the super-eruptions, such as mixing of different kinds of magma.

Editor's note: This story was updated Oct. 31 to correct a reference to Mount Desert Island and add the dimensions of its caldera.