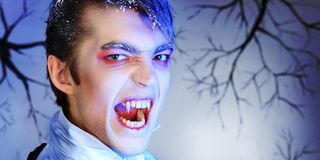 Noah Horowitz is a senior scientist and director of the Center for Energy Efficiency at the NRDC. This Op-Ed is adapted from one that appeared on the NRDC blog Switchboard. He contributed this article to Live Science's Expert Voices: Op-Ed & Insights.

Along with being a fun holiday for tricks and treats, Halloween is an opportune time to shine a ghostly light on the evil energy vampires lurking in homes. Those ghoulish fangs — also known as plugs in the wall — suck frightening amounts of electricity all night (and day) long, even when bloodthirsty electronics and appliances are turned off or doing nothing useful.

The chilling truth is that as much as one-tenth of the electricity devoured in our homes vanishes as "standby power" — electricity feeding perpetually plugged-in electronics and appliances even when they're idle for long periods of time, like in the dead of night.

But you can drive a stake through these energy demons by following NRDC's Halloween Energy Survival Guide. Not only will it help save money on your utility bill year-round, it also can counter the nightmare of millions of tons of dangerous pollution from power plants generating extra electricity to satisfy energy-gobbling appliances and electronics when they're not being used. Here's what you need to know to protect yourself:

Your cell phone charger is not the boogeyman

Although cell-phone chargers once consumed 2 to 4 watts of power if plugged in with no cell phone attached, today's chargers only use 0.1 watt or less in this ghostly condition. Your microwave oven, on the other hand, draws as much standby power as 35 new cell phone chargers do annually. While unplugging your charger will save some energy, there are far more menacing energy fiends haunting your home.

Video game consoles like the PS3 and Xbox 360 only use 1 watt of power in standby mode while waiting to be turned back on. But if your child or roommate forgets to turn off the console after playing a game or watching a movie, it can — if left on indefinitely — gorge on 60 to 100-plus watts of power in total, wasting $50 to $100 worth of electricity each year. To slay the vampire: Go into the console's user menu and enable the Auto Power Down feature, allowing it to automatically power down after extended periods of inactivity.

NRDC took measurements of set top boxes provided to customers by companies like Comcast, Time Warner Cable, Direct TV and Verizon and found the devices gobbled around $3 billion worth of electricity in 2010 — and a giant two-thirds of it in standby mode. Turning off the box merely dims the clock in some cases, or at best, stops the DVR's hard drive from spinning when not recording a show. To slay the vampire:

Buy a "green" TV and choose the right settings

Today's flat-panel televisions use far less energy than the models from just a few years ago. To slay the vampire: Buy a TV with the ENERGY STAR label, or better yet, one that meets EPEAT's criteria, ensuring it's not only energy efficient, but also has very low levels of toxics, is designed to be easily recycled, etc. During set-up of your new TV, select the home or standard setting, which avoids the overly bright "vivid" or "retail" settings that burn an extra 15 percent to 20 percent of power. And don't choose "quick start" unless you really need it. Most TVs today use enough power in standby (0.5 watts or so) to recognize your remote control's signal when you want to turn it on. With "quick start" the TV might turn on slightly faster, but it's also likely to consume substantially more standby power during the 15 to 20 hours it's turned off every day.

Don't watch Dracula (or other movies) from your game console

Many of the newer TVs are internet-ready and allow you to stream a movie from Netflix without another device. The next best thing is to access movies via a small box such as Roku or Apple TV which use 5 or fewer watts to stream. To slay the vampire: Never use your game console to stream movies because it uses 10 to 20 times more energy.

Ensure your computer sleeps when you're not there

There's no need for your computer to be fully awake if you're not using it. It can reawaken in less than five seconds when you shake the mouse button or lift the laptop's lid. To slay the vampire: EPA recommends adjusting control panel settings for the monitor/screen to turn off after 15 minutes and the computer to go to sleep after 30 minutes. You can adjust these settings to meet your needs, but the key is for the computer to turn off when not in use. A typical desktop computer and monitor left on 24/7 can waste $40 per year in electricity compared to the same desktop set going into sleep mode when unused. Meanwhile, running a continuous slide show or screen saver of your family or pet wastes money because it prevents the computer from going to sleep, making it work harder than necessary when no one's there.

The new vampires are data modems and routers

Almost every home with high-speed internet service has a modem to transmit data and a router to move that data around to your laptops and tablets. A recent NRDC study found these devices consume roughly $1 billion of electricity annually — and drink almost the same amount of energy when receiving email as when skulking in the dark at 3:00 a.m. To slay the vampire: Look for models with the ENERGY STAR label as new, more-efficient devices with better power management are starting to hit the shelves.

Even if you buy the most efficient air conditioner, heater or water heater on the market, your energy savings are highly dependent upon the settings you select. Use a programmable thermostat to ensure your home is not wasting energy keeping cool in the summer or warm in the winter when no one's there. Set the temperatures on your gas or electric water heater only as high as you need. Otherwise, the heater works harder than necessary to make sure hot water is always ready for you. And if the water from the tap almost burns your hand, the water heater setting is too high and you're probably throwing a few $20 bills down the drain every year.

In other words, you don't need garlic and wooden stakes to ward off the terrifying vampire energy predators — you can simply "off" many of them with the right buttons and settings.

This Op-Ed is adapted from "Vampire Slaying and More: NRDC's Halloween Energy Survival Guide," which appeared on the NRDC blog Switchboard. The views expressed are those of the author and do not necessarily reflect the views of the publisher. This version of the article was originally published on Live Science.