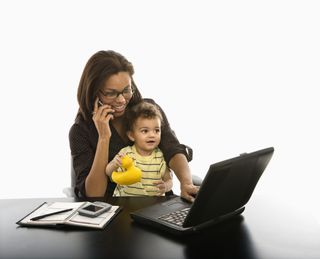 Anecdotal evidence has long supported the hypothesis that the fair sex is also the "do-a-bunch-of-things-at-the-same-time" sex. And now a study out of the U.K. helps to support the idea women are better at multitasking than men.

In the first experiment, 120 men and 120 women played a computer game in which they were asked to carry out two tasks independently of one another. Both sexes performed these individual tasks with the same speed and accuracy. But when participants were asked to perform the two tasks at the same time, women were quicker; their responses were only slowed by about 61 percent compared with the first task, while men's were slowed by about 77 percent. [10 Ways to Keep Your Mind Sharp]

According to researchers, the results of this experiment suggest women are more adept than men when it comes to switching quickly between different tasks. Women also fared better in the second experiment, in which both sexes were put to the test performing a set of common, real-life tasks — like sketching out a plan for finding a lost set of keys, locating different restaurants on a city map and solving simple arithmetic problems. Participants (47 men and 47 women) were given a certain amount of time to perform these various tasks simultaneously. To complicate matters even further, participants also had to contend with a ringing telephone that, if answered, prompted them for answers to general knowledge questions.

Women were found to be better at some types of "real world" multitasking, as well.

"Men and women did not differ significantly at solving simple arithmetic problems, searching for restaurants on a map, or answering general knowledge questions on the phone, but women were significantly better at devising strategies for locating a lost key," the researchers write online in the journal BMC Psychology.

Perhaps most significantly, women scored much higher than men on the key search task, leading researchers to suspect women might possess a higher level of cognitive control than men — particularly when it comes to planning, monitoring and inhibiting behavior.

The researchers caution against making generalizations based on this study because there is very little experimental evidence of multitasking differences between men and women. "Instead, we hope that other researchers will aim to replicate and elaborate on our findings," they write.

Even so, humans overall may not be natural-born multitaskers, as research has suggested dividing attention across several tasks can tax the brain. Dividing attention across multiple activities is taxing on the brain, and can often come at the expense of real productivity, said Arthur Markman, a professor in the department of psychology at the University of Texas at Austin.

"There's a small number of people who are decent multitaskers — this concept of a 'supertasker' — but at best, it's maybe 10 percent of the population, so chances are, you're not one of them," Markman told LiveScience in June. "The research out there will tell you that there are a couple of people who are good at it, but it's probably not you."