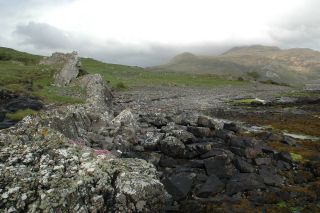 One of the thousands of cone-sheets from Ardnamurchan volcano, exposed as an inclined wall of basalt.
(Image: © Steffi Burchardt)

The land of the rings brings hundreds of pilgrims to a windswept corner of western Scotland every year.

A journey around Ardnamurchan volcano's well-worn trails is an annual rite of passage for geology students in Europe. Regular tourists also brave the remote trek to the national geopark, which protects 1 billion years of Earth's history.

Ardnamurchan's fame comes from an 83-year-old study that launched volcano science in Europe. The study, a meticulous geologic map of ringlike structures preserved in the Ardnamurchan volcanic rocks, revealed the volcano's hidden source: a series of three magma chambers.

Instead of three magma pulses, just one big push birthed Ardnamurchan volcano, according to a study published Oct. 8 in the journal Scientific Reports.

"What we see is one big magma chamber. There's not three distinct places," said Steffi Burchardt, lead study author and a geoscientist at the University of Uppsala in Sweden. "It is much more like we see magma chambers today."

Ardnamurchan is one of several extinct volcanoes on Scotland's northwest coast that mark the opening of the North Atlantic Ocean starting 60 million years ago. As Greenland drifted away, the first floods of magma arrived from a hotspot that now sits under Iceland. In epochs since, glaciers ground away the tops of the volcanoes, leaving their hearts exposed.

Nearly a century ago, British geologists mapped hundreds of thin, cone-shaped intrusions at Ardnamurchan. The intrusions are magma that pushed into underground cracks and cooled beneath the surface. They're like guiding arrows, arranged in a ring, narrowing down toward their source. [The 10 Biggest Volcanic Eruptions in History]

But when Burchardt and her colleagues brought Ardnamurchan's geologic map into the modern age, inputting the precisely mapped structures into a 3D computer model, they encountered a surprise.

Instead of three meeting sites, the cone sheets focused on a single, saucer-shaped chamber where the roiling molten rock once awaited its release. The chamber lies about 1.5 kilometers (1 mile) below the current surface and was up to 6 km (4 miles) long when active.

The size and alignment of the magma chamber created by the computer model matches with recent geophysical surveys of the volcano, as well as displacements in sedimentary rocks, Burchardt said. (The covering rocks were shoved and deformed as the magma pushed its way upward.)

Burchardt said that since the 1930 study, knowledge of how volcanoes form has advanced tremendously. "They were among the scientists who laid the foundation of modern volcanology," she said. "I guess if they had all the knowledge we had today, they may have seen Ardnamurchan differently."

"The mountain is a real icon, so people have a bit of respect for it," Burchardt told LiveScience's OurAmazingPlanet. "Maybe this is the reason why scientists haven't dared touch it for a long time."