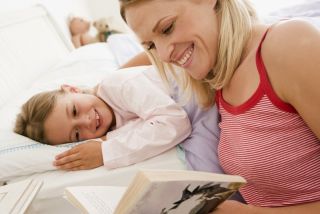 Young children who don't have a regular bedtime behave worse than kids who go to sleep at the same time each night, a new study suggests.

British researchers found that both mothers and teachers rated 7-year-olds who had inconsistent bedtimes as being more hyperactive than their better-rested peers, and as having more social, emotional and conduct problems.

The results also revealed that behavior grew worse the more years a child spent without a firm bedtime. But the good news is that children's behavior noticeably improved when they switched to a scheduled bedtime.

"This is a very well-done study that in many ways reaffirms what we already know about a lack of sleep," said Dr. Carolyn D'Ambrosio, director of the sleep center at Tufts Medical Center and the Floating Hospital for Children in Boston, who was not involved in the research.

She said the findings clearly show an association between kids behaving better and a regular bedtime. [10 Scientific Tips for Raising Happy Kids]

The study is published online today (Oct. 14) in the journal Pediatrics.

In the study, researchers looked at data from more than 10,000 children enrolled in the Millennium Cohort Study, a long-term study of babies born in the U.K. in 2001 and 2002.

When children were ages 3, 5 and 7, their mothers filled out questionnaires describing whether the child went to sleep at a regular time on weeknights during the school year, and what that bedtime was.

Researchers found that almost 9 percent of the 7-year-olds lacked a regular bedtime.

Having an irregular sleep schedule had the greatest effect on a child's behavior, but kids with later bedtimes also tended to behave worse.

D'Ambrosio said the study findings strengthen the argument for a consistent bedtime for children because there were a large number of kids involved in the research, and their behavior was rated at three different ages.

For both kids and adults, "when people are sleep-deprived, they are a little bit moodier, have a shorter temper and their normal physiological processes aren't as finely tuned," D'Ambrosio said.

"Kids don't say they're tired, they typically act it out -- most commonly by being hyperactive," she said. In fact, the study found that erratic bedtimes had the strongest influence on children's hyperactivity levels, as judged by their mothers and teachers.

A lack of sleep also shows up in a child's school performance, moodiness, eating habits and as behavioral issues, D'Ambrosio said.

Having nighttime routines and a regular bedtime adds structure and consistency to a child's schedule, D'Ambrosio said.

An enforced bedtime helps kids to function their best the next day, and to get a regular amount of sleep. Kids ages 5 to 7 need 10 to 12 hours a night, she said.

This means enough sleep to get through all stages of sleep, which have important functions that regulate the body: For example, deep sleep helps people to wake up feeling refreshed, while REM sleep helps to improve memory skills.

Sufficient shut-eye is also critical for children because their young brains are still developing.

D'Ambrosio advised parents to start the process of regular bedtimes early in a child's life. This process involves letting children know when bedtime is coming and beginning their nightly routines -- brushing teeth, bathing, putting on pajamas, reading a story, dimming lights and allowing children to have a comfort item, such as a stuffed animal but limiting stimulating distractions, including a TV or iPad.

"Pick a bedtime that works for you and your family," she recommended. "It may not work every night, but just keep trying."

D'Ambrosio also suggested that kids have consistent bedtime schedules, even on weekends and during the summer.

She is quick to remind parents that "sleep is one of the most important things you can do for a child's health and behavior."