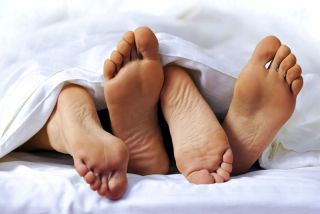 After childbirth, both parents have changes in their sexual desires, a new study finds.
(Image: © Couple in bed photo via Shutterstock)

One drug, called Promescent, is a spray that contains the anesthetic lidocaine, which reduces sensitivity by numbing the skin, to "allow for longer performance," according to NBC News. The drug is absorbed quickly, so it doens't transfer to the man's partner. It is available over-the-counter.

Another spray-on drug, called Tempe, uses the anesthetic prilocaine, and is coming to market in Europe, NBC says.

"There is a tremendous recreational component," Jeff Abraham, CEO of Absorption Pharmaceuticals, which makes Promescent, was quoted as saying.