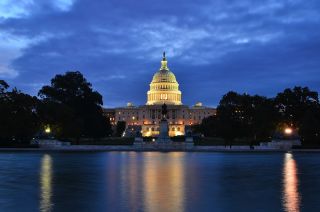 The U.S. Capitol building in Washington D.C. When people form groups, they may act in ways that they wouldn't as individuals, and this may be one reason why the current congressional conflict lead to a government shutdown.
(Image: © Capital building photo via Shutterstock)

The failure of Congress to reach the agreement needed to avoid a government shutdown, in some ways, can be seen as the result of human nature, and the way people act when they form groups such as political parties, psychologists and sociologists say.

Humans are very tribal beings, and like to form groups, which is great for cooperation and community building, but can have negative consequences in terms of conflict, said Matt Motyl, a doctoral student in social psychology at the University of Virginia. "We become better able to fight off other tribes," when we form groups, Motyl said.

Problems arise when one group perceives that its members or values are threatened in some way. When this happens, people in parties may act in ways that they wouldn't act as individuals, experts say. [7 Great Dramas in Congressional History]

"When groups perceive that there is some sort of threat to what's important to them, people tend to put their own interests aside" and act on behalf of the group, said Nick Berigan, visiting assistant professor at East Tennessee State University's Department of Sociology and Anthropology.

Studies show that people who are generally the most cooperative individuals tend to be the least cooperative when their group faces off against another group, Berigan said. "Once they start a group, they're looking to protect it," Berigan said. Other research shows that groups make more extreme decisions than individuals, Motyl said.

"They have become extreme versions of themselves in an effort to ward off this fear that they will somehow be associated," with beliefs they disagree with, and in the case of the government shutdown, this is the idea of the Affordable Care Act, said Suzanne Lachmann, a licensed clinical psychologist in New York City.

And its issues like these — that strike the very heart of a particular group's beliefs — on which people may be the least willing to compromise.

"People are less likely to comprise and bend when they think that fundamental moral concerns are at stake," said Christopher Federico, an associate professor of psychology and political science at the University of Minnesota.

For some members of Congress, this isn't a debate about spending in general, "It’s a fundamental, moral issue about how big the government should be," Federico said.

Although members' actions may appear to be irrational, their behavior may actually have a rational basis, experts say. Through these actions, individuals are showing their commitment to their group, and may even gain status from their behavior.

"The crazier/wilder thing that you're willing to do to show commitment to the group," the more status you may be given, Berigan said.

And if one group can convince the other that it's willing to do something "crazy," the latter group may concede because they "decide that it's better to be the 'losing team' than to face the much graver consequences of conflict," Berigan said. "In that regard, it is rational to appear irrational," he said.

There's no saying how the current government impasse will end. But in the past, concern about group reputation (in this case, the reputation of a political party) has lead one group to back down, Federico said.

"Maybe their shared goal is to put back the 800,000 furloughed into their jobs, and make sure that essential services continue to be provided," Motyl said. Being reminded of these shared goals might increase the likelihood of cooperating, he said.