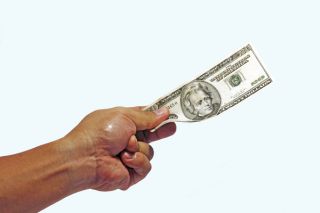 Even if it can't buy happiness, money can encourage cooperation and trust among strangers, according to new research.

Researchers designed a series of experiments to investigate how monetary systems affect human behavior, and found that money functions as an institution that improves cooperation and trust.

"There's a theory that we use money because without it, we would do much worse, in terms of trade," said study lead author Gabriele Camera, a professor at the Economic Science Institute at Chapman University in Orange, Calif. But this theory hasn't yet explained the role of human behavior in trading, he said.

Early human civilizations survived by sticking together in small groups and trading within them, but modern societies are largely based on transactions between strangers. The researchers wondered what drives cooperation between people who don't know each other. [5 Ways Relationships Are Good For You]

In the study, the researchers examined human interactions in a control setting — in which there were no incentives to cooperate, but also no incentives not to cooperate — and found that people were primarily self-interested. To evaluate the degrees of cooperation, the participants played a "helping game," in which they had to consider the costs and benefits of helping an anonymous stranger. Camera and his colleagues observed these interactions in groups of two, four, eight and 32 people.

"They did not trust each other in the control conditions when they had nothing to exchange," Camera told LiveScience. In particular, as group sizes increased, people were more wary of others, he added.

The researchers then introduced tokens, which had no value outside of the laboratory, to see if they affected levels of trust and cooperation between the study participants. The researchers found that when tokens were involved, people became more likely to cooperate. Individuals started giving out tokens in exchange for help, and expecting tokens when they extended help to others.

"It's not that they trusted others, but they trusted that others would help in exchange for a token," Camera explained. "This object, which has no intrinsic value, acquired value and became a symbol of trust."

The tokens also encouraged greater cooperation in large groups, but once again, only in situations where the valueless tokens acted as currency, and could be given or received as part of a transaction.

"There was a clear social cost from using the tokens," Camera said. "Cooperation did increase relative to the control economies without tokens, but in situations where people had no more tokens, sellers were unwilling to cooperate."

The findings suggest money plays an important sociological — and not simply economical — role in modern societies.

The detailed findings of the study were published online today (Aug. 26) in the journal Proceedings of the National Academy of Sciences.