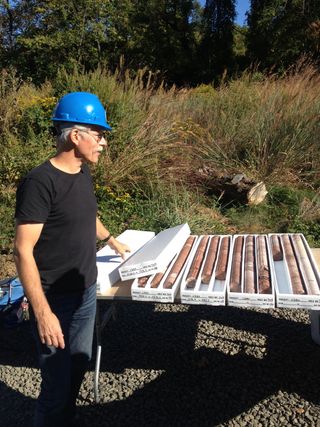 PALISADES, N.Y. — Just a stone's throw from New York City, at a satellite of Columbia University across the Hudson River, this site in the woods is seemingly worlds away from the bustling streets and honking cars. But there's another kind of activity going on here: Researchers are drilling deep into the Earth to search for buried treasure.

It's not exactly diamonds and gold these scientists are after, but rather never-seen-before rocks that could tell them whether or not it may be possible to store carbon dioxide deep underground in the area to avert some of the worst effects of global warming — a procedure called carbon sequestration. The study of the rocks is also shedding light on the geologic history of the area, as they are brought up one at a time in 10-foot-long (3 meters) cores about the diameter of a tennis ball.

So far, the drilling project, overseen by researchers Paul Olsen, David Goldberg and others at Columbia's Lamont-Doherty Earth Observatory, has made it more than 1,600 feet (488 meters) beneath the surface. The team has brought up some sandstone that looks promising for carbon sequestration, although much more analysis will be required before a conclusion is reached, Olsen told LiveScience at the drilling site. [Video: How Carbon Capture & Sequestration Works]

To be used in carbon sequestration, rock must be permeable and porous, to give carbon dioxide gas injected into the ground somewhere to go, said Olsen, a man with thick glasses who appears to be able to read rocks like books. These exact qualities are found in rocks in petroleum reservoirs. In fact, carbon dioxide is often pumped into these wells to force out more oil, Olsen said. And when these oil and gas reserves are emptied, they become the most promising destination for waste carbon dioxide, since geologic history has proved them to be places where gases can be bottled up for eons (and natural gas, for instance, is more volatile and difficult to contain than carbon dioxide), he added.

However, these reserves are rarely near cities and power plants. That makes storage of waste carbon dioxide there infeasible due to the difficulty and expense of transport, said Goldberg, an amiable geologist who guided this reporter around and explained what was going on. Hence the interest in storing the waste gas nearby, such as deep underneath the New York City area or beneath the seafloor.

Of course, many people aren't comfortable with the idea of storing tons of carbon dioxide beneath their feet, Olsen said. But the process has been carried out without problems in many cases, and it's possible that minds could change if climate change reaches disastrous proportions in the future, for example, if it leads to severe rises in sea level, he added.

The drilling project is ultimately exploratory, Olsen said — they don't know what they will find. And indeed, on a recent sunny September afternoon, the drill brought up cores with an unexpected peppering of gypsum, a mineral known to form in relatively dry ancient climates, which is at odds with the thinking that much of this ground layer was laid down under moist conditions about 223 million years ago, when the area was a part of Pangaea and located near the equator, Olsen said.

Now that the drill has reached about 16 stories beneath the surface, each core takes about an hour to extricate. Deep underground, the diamond-tipped drill bit takes about 10 minutes to cut out each 10-foot cylinder, a length that spans a period of about 20,000 years of Earth's history. It is then carried to the surface, arriving inside a metal cylinder that has to be whacked with a sledgehammer to empty, spilling forth several chunks of reddish mudstone, which are then reassembled into a cylinder like a jigsaw puzzle. After drying out, researchers record the depth with a marker on the side of the stone.

Drilling at the edge

Olsen, Goldberg and others have been involved in drilling into different areas of this rock formation, known as the Newark Basin (stretching beneath New York, New Jersey and Pennsylvania) on and off for decades. But nobody has drilled at this exact location, which is at the edge of the basin, Olsen said. By combining the geologic knowledge gained here with earlier deep drilling done near the Tappan Zee Bridge and elsewhere, the team hopes to get a better picture of the overall structure of the basin.

One question that hasn't been answered: Even if there are suitable rocks like sandstone to hold carbon dioxide in place, would the rock be sealed off well enough to prevent the carbon dioxide from leaking back into the atmosphere? Olsen and Goldberg said it isn't yet clear. [Top 10 Craziest Environmental Ideas]

But each bit of rock gets them closer to understanding what lies beneath.

"Every core has a new story," Goldberg said.

The scientists stumbled upon one particularly interesting event at a depth of 716 feet (218 m). There, an enormous plume of magma spewed across the area about 201 million years ago, Olsen said. This molten rock poured out of a gargantuan fissure in the Earth, in a flow called the Central Atlantic magmatic province, coinciding with one of the biggest mass extinctions in history, the Triassic-Jurassic extinction event, Olsen said. At that time, carbon dioxide concentrations reached as high as 2,500 parts per million (ppm) or more, creating a hot climate.

For comparison, today's levels of carbon dioxide are at about 400 ppm and rising as industry, shipping, automobiles and other manmade sources continue to spew gas into the atmosphere. Meanwhile, Olsen and Goldberg keep drilling, looking to see if some of that carbon dioxide could one day be stored there.