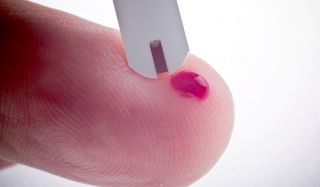 Women tend to develop heart disease about 10 years later than men, and new research suggests this is partly due to women's bodies being better at compensating for insensitivity to insulin, which controls blood sugar.

The study found that among people with insensitivity to insulin, women were less likely than men to have risk factors for heart disease and diabetes, such as high blood pressure and triglycerides. This, in turn, could delay the onset of heart disease, the researchers said.

The findings were published today (Sept. 24) in the Journal of Clinical Endocrinology and Metabolism.

After eating carbohydrates, blood sugar rises. The pancreas produces insulin, a hormone that tells the body's cells to take up glucose from the bloodstream, thereby lowering blood sugar back to normal. [8 Tips for Fighting Sugar Cravings]

But some people's bodies are insulin-resistant, meaning their cells require a much higher amount of insulin to take up glucose from the blood.

At this point, people may develop metabolic syndrome, a group of five risk factors including high blood sugar, triglycerides and blood pressure, low levels of good cholesterol and a large waist. Metabolic syndrome can be a precursor to diabetes and heart disease.

Dr. Sun Kim, an endocrinologist at Stanford University Medical School, and her colleagues wanted to understand the factors that affected this process. They asked 468 women and 354 men to fast overnight.

Afterward, they injected the participants with glucose, insulin and a hormone that prevents the body from producing its own insulin, and then measured the participants' blood sugar a few hours later. The test allowed them to measure the exact relationship between insulin levels and blood sugar.

Women under 50 with insulin resistance, meaning they had high blood sugar after a meal, somehow avoided the risk factors associated with metabolic syndrome and heart disease.

But as women aged, that advantage disappeared, and older women who were insulin-resistant had the same heart disease risk factors as men.

"Younger women, when they are resistant, are able to handle the complications a lot better," Kim said.

Still, it's not clear why younger women have some protection against heart disease. One possibility is that the hormones that affect the menstrual cycle play a role.

But the role of female hormones isn't clear-cut: For instance, giving women synthetic versions of hormones such as estrogen doesn't have the effects seen in the study, Kim said.

Either way, there are things that insulin-resistant people can do to avoid the onset of Type 2 diabetes and heart disease.

"The two lifestyle things that are closely associated with insulin resistance are gaining weight, and being sedentary," Kim told LiveScience. Exercising and losing weight are the best ways to reverse insulin resistance, she said.