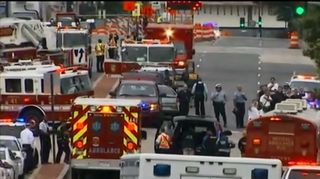 In the wake of the Washington Navy Yard shootings in which 13 people were killed — including suspected shooter Aaron Alexis — on Monday (Sept. 16), some people are wondering what might drive a person to commit mass murder.

A number of media reports indicate that Alexis was living with mental health issues and, according to The New York Times, had sought treatment for psychiatric issues from the Department of Veterans Affairs (Alexis was a former Navy reservist who worked as an independent contractor).

On Aug. 7, Alexis called police to his hotel room in Newport, R.I., where he complained that "three individuals were speaking to him through the floor," and that "the individuals are using 'some sort of microwave machine' to send vibrations through the ceiling, penetrating his body so he cannot fall asleep," according to the Newport Police Department report. [Top 10 Controversial Psychiatric Disorders]

To some experts, hearing voices from afar and complaining about the use of devices to transmit signals into a person's body are classic symptoms of schizophrenia. "It sounds like a fairly typical case of paranoid schizophrenia," Dr. E. Fuller Torrey, a professor of psychiatry at the Uniformed Services University of the Health Sciences, told PBS Newshour.

The onset of schizophrenia

In most cases of schizophrenia, "the age of onset is late adolescence and early adulthood," said Dr. Douglas Mossman, professor of psychiatry at the University of Cincinnati.

Mossman emphasized that he did not treat Alexis, and that it's not possible at this point for him to diagnose Alexis with schizophrenia or any other mental illness. In general, he said, schizophrenia shows up at different times in male and female patients. "In men it typically develops in their late teens and early twenties — in women it might be later, in their late twenties. In both cases, the symptoms come on gradually."

According to the National Institutes of Health (NIH), schizophrenia affects about 1 percent of Americans. Symptoms can include hallucinations, delusions, disorganized thought patterns, lack of interest or pleasure in everyday life, and speaking little, even when forced to interact with others.

Mossman notes that available treatments — including medicine and psychosocial treatment — "have clear benefit for most of the people who have schizophrenia." Treatment can include antipsychotic medication, cognitive-behavioral therapy and family education, according to the NIH.

Mental health experts have found that the vast majority of people with mental illnesses — including schizophrenia — are not violent. Nonetheless, "studies show that even when controlled for other factors [being young, male or poor], there does seem to be an increased risk of violence in people living with a diagnosis of schizophrenia," especially among those with symptoms such as hallucinations and delusions, Mossman said. [The 9 Most Bizarre Medical Conditions]

In a 2009 study published in the Journal of the American Medical Association, researchers found that people with schizophrenia have an increased risk of violent crime when compared with the general public, particularly among patients with substance abuse issues.

And in a 2013 study detailed in the journal PLOS ONE, scientists found that, in addition to substance abuse, risks of violent behavior increased among patients with schizophrenia, bipolar disorder and other psychoses when those patients did not adhere to a regimen of psychological therapy or drug therapy.

Getting the help they need

Experts note that even the best available therapies are useless when they're not made available to the people who need them the most. American society is "not good at getting those treatments to people," Mossman said.

"This is because we have a total breakdown of the public mental-health treatment system," Torrey told PBS. "You're looking at the breakdown over the last half-century where we have released everyone from the hospital, but we don't provide treatment in the community for them."

Alexis, who had sought mental health treatment from Veterans Affairs, still retained his security clearance, which enabled him to enter the Washington Navy Yard on Monday. The mass shooting has raised a number of concerns about the background checks used to purchase firearms and determine security levels at government agencies.