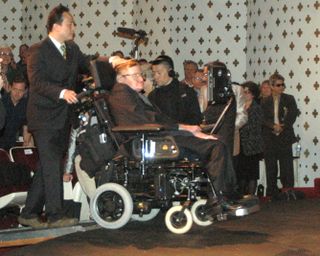 Dr. Stephen Hawking is brought onstage by a helper to give his presentation, "The Origin of the Universe," at Caltech on April 16, 2013.
(Image: © Rod Pyle/SPACE.com)

Physicist Stephen Hawking says he thinks terminally ill patients should have access to assisted suicide, as long as there are checks to prevent abuse.

"I think those who have a terminal illness and are in great pain should have the right to choose to end their lives, and those who help them should be free from prosecution," Hawking told the BBC.

In the interview, which the Cambridge University professor gave in advance of the release of a documentary about his life, Hawking recalled his experience being on life support after pneumonia. His wife had the option of turning off the life support, but he wanted to continue living.

Assisted suicide is one of the most divisive issues around the globe. It is legal in Oregon, Washington and Vermont, as well as several European countries — but not in the United Kingdom, where Hawking comes from.

Proponents argue that allowing people who are terminally ill and in incredible pain to end their lives is compassionate. Opponents argue that legalizing assisted suicide will allow caregivers to pressure or trick the disabled, the elderly and the financially insolvent into consenting in order to avoid becoming burdens. [Top 10 Leading Causes of Death]

Hawking said that risk had to be addressed.

"There must be safeguards that the person concerned genuinely wants to end their life and are not being pressurized into it or have it done without their knowledge and consent as would have been the case with me," Hawking told BBC.

In recent years, Hawking has aired his views on a number of controversial subjects: He has argued that the Big Bang didn't need God and that human survival depends on space colonization.

Hawking, now 71 years old, is known for his theoretical work on the origin of the universe and black holes. He was diagnosed with amyotrophic lateral sclerosis, commonly known as Lou Gehrig's Disease, at the age of 21. The neurodegenerative disease causes the nerve cells that control movement to degenerate, and is almost always fatal.

Though Hawking has been wheelchair bound for decades and lost his ability to speak without an electronic voice in 1985, that hasn't stopped him from working on physics. He published his iconic popular physics book, "A Brief History in Time," in 1988.

The documentary "Hawking" by Vertigo Films is slated for release in Britain on Sept. 20.