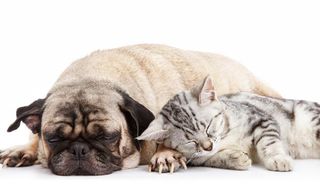 At The HSUS, we are working to end the euthanasia of healthy and treatable dogs and cats. Only about five million of the eight million dogs and cats who enter shelters today make it out alive.

Though these are better ratios than in years prior, there's still so much life-saving work ahead. Any business or enterprise with that kind of failure rate needs to conduct self-examination, challenge orthodoxies and find new ways to improve outcomes.

That's why I'm so pleased to share and promote the results of path-breaking work done during the last 18 months by key stakeholders in California. Despite being the most progressive state with respect to animal welfare policy — including a state law that no adoptable or treatable animal shall be euthanized — California shelters still take in nearly a million dogs and cats a year, with 40 percent, or 400,000, dying (150,000 dogs and 250,000 cats).

Emotionally and morally troubled by these results, and spurred by annual state budget confrontations over funding for state-mandated shelter holding periods, The HSUS worked to develop a solution alongside other leaders representing a cross-section of animal-welfare community organizations in California. Those partners include leaders of municipal shelters, rescue groups, private foundations and local and national nonprofit organizations.

The group solicits input from a wide range of opinions from animal-care professionals and has reviewed15 years of data, policies and practices from agencies around the state. The results, which include 23 best practices and legislative recommendations aimed at improving outcomes for homeless animals in California, were released last week in a draft white paper, introductory video and listening-tour launch.

Highlights from the draft recommendations include the following:

If you live in California, please join our state director at one of the listening-tour sessions coming up this month and next. The paper is a draft and they want to hear from you. What'd they miss? What'd they get wrong? What'd they get right? What else could be done at this moment where the focus is on making major changes?

Whether you're a resident of California or not, this document is a roadmap to get us past euthanasia of  healthy dogs and cats. That's a core goal of the humane movement, and it's about time we get there.

Pacelle's most recent Op-Ed was "Can Farmers Cry Wolf and then Pocket the Cash?" This article was adapted from "'A Blueprint for Ending Euthanasia of Healthy Companion Animals," which first appeared as on the HSUS blog A Humane Nation. The views expressed are those of the author and do not necessarily reflect the views of the publisher. This version of the article was originally published on LiveScience.