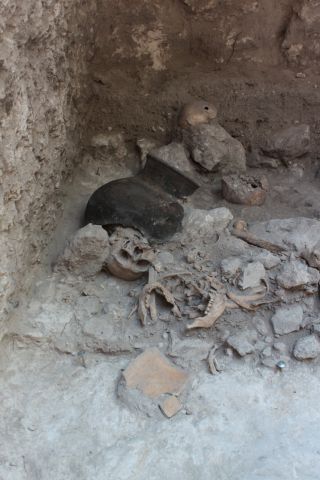 Scientists from the University of Bonn discovered the remains of dismembered human bodies in an artificial cave in the Classic Maya city Uxul in Mexico. Shown here, the cave's interior during the excavations with several skulls, lower jaws and ribs.
(Image: © (c) Photo: Nicolaus Seefeld/Uni Bonn)

An excavation at the site of an ancient Maya city in Mexico has yielded a gruesome find: the remains of dismembered, decapitated bodies. The discovery provides new archaeological evidence for the violent scenes depicted in Maya art, the researchers say.

Nicolaus Seefeld, an archaeologist at the University of Bonn in Germany, stumbled across the 1,400-year-old mass grave as part of his work on the water system in the city of Uxul. The remains of 24 people were found in an approximately 344-square-foot (32 square meters) artificial cave that served as a water storage reservoir.

"Right before 24 victims were buried, the cave's interior had doubtlessly still been used [as] a water reservoir, since the cave's floor was perfectly clean," Seefeld told LiveScience in an email. "After the 24 victims had been buried, the pre-Hispanic Maya covered the remains with a coarse layer of gravel and sealed it with a clay layer. Due to this sealing layer, the documented bones were found in an extraordinarily good state of preservation."

Skulls were scattered around the cave, with no relation to the rest of the bodies. Hatchet marks on the cervical vertebrae (or neck bones) indicated the victims were decapitated. Meanwhile, most of the lower jaws had been separated from the heads. [Photos: 'Alien' Skulls from Mexico Reveal Odd, Ancient Tradition]

Seefeld found the remains of a severed leg, feet, hands and arms with the bones still articulated, or connected at the joints. This pattern indicates "that victims were killed at the same time, then chopped into several pieces and finally buried in the artificial cave," Seefeld said in an email.

The archaeologists' analysis revealed the age and sex of 15 of the dead: Two were women; and all were between 18 and 42 at the time of death. As to their backstory, Seefeld and colleagues have formulated two possible scenarios. They suggest the dead may have been prisoners of war from another city or nobles from within Uxul.

Maya art depicts scenes of violence, including warfare, and the capture and sacrifice of captives. However, the archaeological evidence for this violence has been limited, Seefeld told LiveScience.

Supporting the idea that the dead in the Uxul mass grave had been nobles, some of the bodies had jade tooth decorations, which the researchers interpreted as a sign of high social status.

Ceramics found in the artificial cave at Uxul suggest the grave dates to the seventh century. At the time, evidence suggests,Uxul's nobility lost their titles when the city was incorporated into the Kaan Dynasty, centered at Calakmul, which was 21 miles (33 kilometers) north of Uxul, raising the possibility these victims were once nobility, Seefeld wrote.

More likely, however, the victims came from another site, he wrote. To determine which one is the case, the researchers are planning to conduct a chemical analysis on the remains.

Uxul was a midsize city located in what is now Mexico, close to the Guatemalan border. Explorers Karl Ruppert and John H. Denison discovered the remains of the city, which flourished during the Maya Classical Period from A.D. 250 to 900, and named it Uxul, a Maya word meaning "at the end."

Researchers from the University of Bonn in collaboration with Mexican archaeologist Antonio Benavides Castillo have uncovered water storage pools as large as 10 Olympic-size pools, with floors lined with ceramic shards in Uxul. They also found a richly furnished tomb they suggest belonged to a Maya prince.

The results of the latest discovery have yet to be published in a scientific journal.