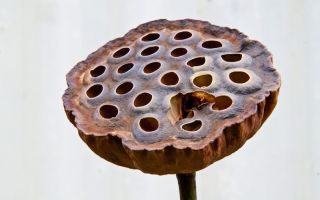 Trypophobia is a fear of holes, like those in this lotus flower seed pod.
(Image: © battle182royal | Shutterstock)

A strange phobia makes people feel panicked or ill at the sight of holes, and new research hints at the cause.

In people who suffer from trypophobia, the sight of soap bubbles, aerated chocolate, or other objects with clusters of holes can cause migraines, panic attacks, hot sweats and a racing heart. The fear may stem from a visual resemblance to poisonous animals, according to a new study.

Trypophobia is "the most common phobia you have never heard of," said study researcher Geoff Cole, a psychologist at the University of Essex, in England, who suffers from the fear himself. [What Really Scares People: Top 10 Phobias]

Though many people have complained of it on the Internet, few studies have investigated the phenomenon. In one study, Cole and his colleagues found that 16 percent of participants showed signs of trypophobia. In his new study, one sufferer described the reaction to hole clusters: "[I] can't really face small, irregularly or asymmetrically placed holes, they make me like, throw up in my mouth, cry a little bit, and shake all over, deeply."

Even so, the phobia is not recognized as a disorder by the recently updated mental health manual, the Diagnostic and Statistical Manual of Mental Disorders (DSM-5).

Cole's team wanted to know if trypophobic objects shared a common visual feature, so they compared 76 images of objects on a trypophobia website with 76 images of holes not associated with the phobia.

The images of trypophobic objects had high contrast at midrange "spatial frequencies" — repetitive spatial features of an image — compared with the nontrypophobic images.

They had the same visual structure as stripes, which can sometimes trigger migraines.

One trypophobic participant provided a clue to understanding the strong aversion to certain hole patterns: He reported having this same negative reaction to seeing a blue-ringed octopus, one of the world's most poisonous animals.

To investigate whether poisonous creatures could be causing the phobia, Cole and his colleagues analyzed images of the blue-ringed octopus, the deathstalker scorpion, the king cobra snake and other poisonous snakes and spiders, finding that they all had high contrast at midrange frequencies, too.

Trypophobics' repulsive reaction to clusters of holes may be a side effect of an evolutionary adaptation to avoid poisonous animals, the researchers believe. "We think that everyone has trypophobic tendencies even though they may not be aware of it," Cole said in a statement. "We have an innate predisposition to be wary of things that can harm us."

Even people who don't fear such hole patterns rated the trypophobic images as less comfortable to look at, said Cole, who added that he cured his own trypophobia by looking at the images so often he became desensitized to them.

To see how ingrained trypophobia might be, Cole's team is now studying how images of everyday objects, like watches, can be manipulated to make people prefer them more or less.

The study was detailed in the journal Psychological Science.