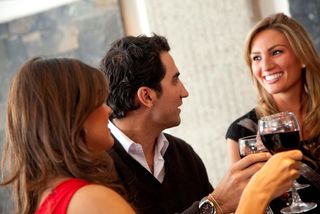 Enjoying several glasses of wine each week may not only protect your heart, it may also help protect your mental health, a new study suggests.

Researchers in Spain have found that drinking moderate amounts of alcohol — especially wine — was linked with a lower risk of depression.

Older men and women who consumed two to seven small glasses of wine weekly were 32 percent less likely to suffer from depression compared with people who never drank alcohol, the study revealed.

These results appear to contradict previous studies, which have often linked drinking alcohol with an increased risk of depression. Two reasons researchers have suggested for this increased risk are that people might drink more to mask depressive symptoms and people might also turn to alcohol to cope with a personal problem, such as job loss, family issues or financial troubles — all factors that may also trigger a depressive episode. [7 Ways Alcohol Affects Your Health]

As for why these findings seem to conflict with other studies on alcohol, lead author Dr. Miguel Martinez-Gonzalez, a cardiologist and professor of preventive medicine and public health at the University of Navarra in Pamplona, said it could be because the new study did not include people who previously had depression, or people known to have drinking problems.

"In our study population, the average intake of alcohol was low, and the pattern of consumption was typically Mediterranean, with alcohol coming preferentially from wine, consumed during meals and without episodes of binge drinking," he said.

The study is published online today (Aug. 29) in the journal BMC Medicine. Some study researchers receive funding from the alcohol industry.

The study looked at more than 5,500 men and women ages 55 to 80 in Spain, who were involved in a research trial evaluating the effects of the Mediterranean diet on heart disease risk. None of them had depression at the study's start.

During a follow-up period of up to seven years, 443 people reported that they were diagnosed with depression.

Researchers found that light to moderate drinkers, who drank 5 to 15 grams of alcohol  daily on average, had a lower risk of depression compared with people who abstained from imbibing. (A small glass of wine contains about 9 grams of pure alcohol).

The lowest rates of depression were observed in people who consumed moderate amounts of wine. The study found that men and women who drank two to seven small glasses of wine each week were 30 percent less likely to develop depression, compared with those who drank none.

These results held true even after researchers took into account other lifestyle factors that could influence rates of the mood disorder, such as gender, age, smoking habits, marital status, education and physical activity levels.

Although the exact reasons why drinking moderate amounts of alcohol may have beneficial effects on the brain are unclear, Martinez-Gonzalez said a compound found in grapes may help protect parts of the brain from inflammatory processes involved in depression.

The finding that alcohol is linked with a lower risk of depression is contrary to most previous work, said Susan Ramsey, an associate professor of psychiatry and human behavior at the Warren Alpert Medical School at Brown University in Providence.

Ramsey, who has conducted research on the effects of alcohol on depressed patients, said the differences in the findings may be due to the highly selective sample involved in the study, or the way depression was measured.

She explained that because researchers did not include people who currently had depression or took medication for it, as well as people with a history of the mood disorder or alcohol-related problems, they were left with a sample that might have been at low risk of developing depression, especially when considering their older age.

"The ability to generalize from the findings of this study to other populations is very limited," Ramsey said.

In other words, it's too soon to toast drinking as a good hedge against this common mood disorder.

"At this point, it would be premature to make any recommendations regarding alcohol or wine consumption as a means of preventing the onset of depression," Ramsey said.