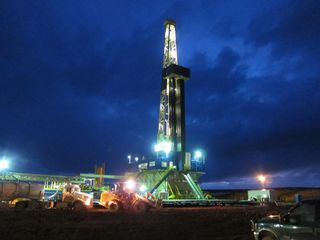 Briana Mordick is a staff scientist at the Natural Resources Defense Council (NRDC). This Op-Ed was adapted from a post to the NRDC blog Switchboard. Mordick contributed this article to LiveScience's Expert Voices: Op-Ed & Insights.

The Bureau of Land Management (BLM) is at a fork in the road to America's public lands. One path offers outdated, inadequate rules — the path that the agency has been following to regulate oil and gas drilling for more than three decades. Down the other path are requirements for oil and gas producers to use today's best-available practices to protect America's clean air, clean water, wild lands and human health. That path would lead toward a future where oil and gas resources are more responsibly developed, in ways that reduce threats to public health and the environment and respect the quality of life in local communities.

The BLM, an agency within the U.S. Department of the Interior, has said its current rules don't address the real environmental and public health risks from technologies like hydraulic fracturing. Unfortunately, the BLM's revised proposed rules, released in May, indicate that the agency plans to continue down the same risky, well-trod path to oil and gas development on public lands it has been walking for 30 years. Fortunately, it's not too late for the BLM to change course and protect the millions of Americans who live, go to school, work, and experience recreation on or near public lands.

Last week, NRDC and a coalition of other environmental groups submitted comments calling on the BLM to significantly improve its proposed rules to regulate hydraulic fracturing on public land. These proposed rules are not only weak, they are dangerous — and some are based on concepts that lack scientific and technical merit.

More than 40,000 acid stimulation treatments are performed in oil and gas wells every year, according to the text "Reservoir Stimulation" (Wiley, 2000). Acid stimulation can use multiple types of acid, including hydrochloric acid and hydrofluoric acid (hydrofluoric acid is extremely toxic beyond its ability to cause burns, and exposure to very small quantities can be life threatening). In addition to acid, acid stimulation fluids use other potentially toxic chemicals, including some of the same substances used in hydraulic fracturing fluids. As with hydraulic fracturing, companies using acid stimulation must disclose the chemicals being used so that communities can properly evaluate the associated environmental and public health risks.

The acids used in acidizing treatments are corrosive and present a risk to the integrity of an oil or gas well. Just like with hydraulic fracturing, mechanical integrity must be established and maintained before, during and after acid stimulation. The spent acid that returns to the surface after acidizing poses environmental risks similar to those from produced water and hydraulic fracturing flowback and must also be properly handled, transported and disposed.

Acidizing presents many of the same environmental and public health risks as hydraulic fracturing and should be regulated similarly. That is why the BLM's first draft of rules, issued last year, rightly would have covered both. The new draft, issued this year, would not apply to acidizing. The BLM should reverse this mistake and ensure any final rule applies to acidizing and other forms of well stimulation.

Another major flaw in the revised proposed rules is the BLM's new "type well" approach. This approach would allow operators to run a cement evaluation log (CEL) — an important way to verify well integrity and ensure groundwater is protected — on only certain wells in a field. The BLM proposal would also allow operators to submit a single permit application for a group of wells, excusing the operators from submitting unique information that pertains to the risks of hydraulic fracturing for each well. This approach is based on the BLM's false assumption that wells drilled through the same rocks will behave the same way. There is no scientific basis for this assumption.

To the contrary, geology can vary significantly over very short distances. These geologic variations necessitate differences in well-stimulation design and operation. As such, all the information submitted in a stimulation permit application should be unique to the well for which a permit is being sought. However under the proposed rule, operators would be allowed to submit generic, not specific, information about critical well characteristics, such as the depth to drinking water and the hydraulic fracturing design. This means that BLM regulators could be making decisions to issue permits without necessary information about drilling and fracturing operations, and therefore without a complete understanding of environmental and public health risks.

Cement and casing failures are recognized as one of the most likely ways by which man-made or naturally occurring (such as methane or brine) contaminants may reach groundwater. CELs are an important tool for reducing those failures because they help operators and regulators determine whether cement is properly bonded to casing, and therefore whether all fluids are properly isolated. However, under the proposed type-well rules, the BLM would allow a CEL from one well to be used as a proxy for multiple wells. This approach is dangerously flawed because CELs from a single well provide no information about the cement integrity of a completely different well. Furthermore, the proposed rules would allow CELs to be submitted after hydraulic fracturing is performed. If drinking water isn't properly protected, the well needs to be fixed before stimulation. However, under the proposed rules, BLM regulators may not know if there's a problem until after stimulation has happened — or they may not know at all, if the results submitted are for a different well.

As my colleagues Amy Mall and Matt McFeeley describe further, these are only a few examples of how the BLM's proposed rules fail to protect public health and our shared natural resources from the risks associated with oil and gas production. In testimony before the House Natural Resources Committee, Interior Secretary Sally Jewell discussed the revised proposed rule on hydraulic fracturing and stated, "…it is important that the public have full confidence that the right safety and environmental protections are in place." Unfortunately, the proposed rules fall far short of that goal.

But it's not too late for the BLM to choose the other path — the one that truly puts the right protections in place to help protect the nation's public lands, and ultimately public health.

This Op-Ed was adapted from Time for the BLM to Switch Paths on the Forked Road to Fracked Oil and Gas on the NRDC blog Switchboard. The views expressed are those of the author and do not necessarily reflect the views of the publisher. This version of the article was originally published on LiveScience.