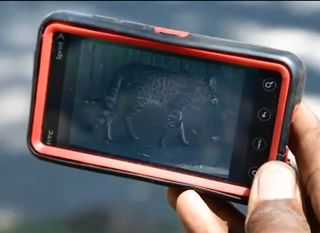 The city of Detroit certainly has its share of woes, including bankruptcy, crime and other concerns. You can now add "large cat" to that list, if recent reports are to be believed.

Residents of Detroit's northeastern area have been calling the Michigan Humane Society and local animal-control officials to report sightings of some kind of cat that may be as large as 100 lbs. (45 kilograms).

Detroit resident Cynthia Hogan saw a feline about as big as her 85-pound (39 kg) Doberman pinscher lying down in her neighbors' backyard. "It was a large cat. It didn't look like a bobcat," Hogan told CBS Detroit. "I was able to see if it had the tufts on its ears, and it wasn't big like a cougar — it wasn't as meaty as a cougar … I have no idea what this was." [Amazing Cats of South Africa]

"His tail is longer than my arm," area resident Antwaun Asberry told the Detroit Free Press. Asberry reported seeing the cat stalking him while he was walking down the sidewalk with his 1-year-old daughter. "I don't know what it is," he said. "I just want it gone."

A photo of the cat taken by an area resident shows a cat, roughly the size of a medium-size dog, with solid, dark spots on pale, grayish fur, and a striped tail. Tom McPhee of the World Animal Awareness Society in Ann Arbor, Mich., believes it may be an escaped exotic pet.

"It's part of the culture,” McPhee told the Free Press. "You're showing off your exotic cat because you can and you have the money."

Other roving animals have concerned Detroit residents in recent years. Widely circulated reports claim that abandoned dogs are roaming the city in menacing packs. Some sources state that as many as 50,000 dogs run wild on the city's streets.

But the actual number of abandoned dogs is disputed, and may be the result of media hysteria surrounding the demise of Detroit. The rumor about "whole packs of dogs roaming the street has gotten out of control," Kristen Huston, Detroit team leader for All About Animals Rescue, told USA Today.

Whether the issue is exotic pets, feral cats or dog packs, animal control remains a challenge for Detroit. As a result of the city's financial crisis, there are only four animal-control officers available, down from 11 in 2008, according to USA Today.

Private organizations have stepped in to help manage animals in Detroit. Last week, the Michigan Humane Society said it would assist in investigating the reports of the large cat on the loose.

"We're going to put some effort into this," Nancy Gunnigle, a director with the Humane Society, told the Free Press. But cats this size, she said, are "not easy to catch."