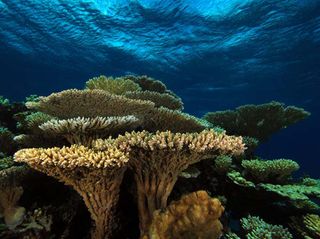 Table coral (Acropora cytherea) is common throughout the tropical Pacific, but in Hawaii its distribution is limited to French Frigate Shoals and neighboring atolls northwest of the main islands.
(Image: © Greg McFall/NOAA)

A type of coral common to the tropical Pacific but rare in Hawaii has been discovered off the coast of Oahu for the first time.

The table coral, Acropora cytherea — named for its tablelike flat top that extends above its stubby base — colonizes broad stretches of the mid-Pacific, but has only been spotted in three locations off of the main Hawaiian Islands, and never around Oahu.

Researchers with the National Oceanic and Atmospheric Administration (NOAA) based in Oahu discovered the unexpected colony last November during a routine scuba survey off the southern coast of the island. Based on the size of the coral, they estimated that it was about 14 years old. A summary of their findings appears in the July issue of the journal Bulletin of Marine Science. [Colorful Creations: Incredible Corals]

"This discovery represents a significant contribution to the diversity of Oahu reefs," Daniel Wagner, a NOAA researcher and an author of the paper, said in a statement.

The team surveyed an area more than 2,000 square feet wide (600 square meters), but did not find any additional table coral colonies. They think this could indicate that the species is in the early stages of populating the Hawaiian Islands, likely traveling from the more abundant population on the mid-Pacific island Johnston Atoll, located 800 miles (1287 kilometers) southwest of Oahu.

Editor's Note: This story has been updated to correct the location of Johnston Atoll. It is located southwest of Oahu, not southeast.