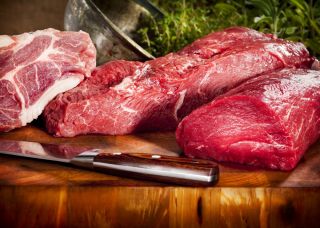 Sergey Brin — the Google founder, innovator and billionaire — craved a burger, but wanted to hold the suffering and the slaughter.

Brin has been a primary driver behind one of the most revolutionary developments in the modern era, a new way of aggregating and searching for information, and now he is helping drive efforts to revolutionize the production of meat. Earlier this week, the news broke that Brin funded research to create meat in a laboratory setting by growing animal tissue from stem cells.

In short, Brin is supporting a new way of growing meat without the killing, the inefficient use of feed grains and the waste generated by billions of animals. He has said the high costs of meat, especially when it comes to the environment, are not workable for our society.

At the same time that story was emerging, the slaughter lines didn't get revved up in Sigourney, Iowa, or Roswell, N.M. — but it wasn't as a consequence of a scientific breakthrough. It was a legal proceeding that stayed slaughter. Last Friday, a federal judge issued a temporary restraining order in favor of The HSUS and Front Range Equine Rescue, along with New Mexico Attorney General Gary King, former Governor Bill Richardson and actor Robert Redford. The order halted horse slaughter plants from opening operations in the United States after a hiatus of six years.

That federal court action provides a reprieve, but not a final answer. The judge will see the opposing parties in court about a month from now, and take a deeper dive into the arguments. Meanwhile, Congress has language pending in an annual spending bill to defund federal inspections of horse-slaughter plants. And there are also bills in the House and Senate to ban the slaughter and export of American horses for human consumption at home or abroad.

The HSUS has an interest in all of these matters. On horse slaughter, we've long opposed it. Horses aren't raised for slaughter, and we don't favor the way they are gathered up from random sources, or how they're treated throughout the long-distance transport and slaughter process.

We think people who acquire horses should be responsible owners.

Regarding the tissue-culture meat , The HSUS has long been concerned about the nation's 50-year, failed experiment with factory farming. While it has provided cheap meat to consumers (while externalizing its aggregate costs to society), it's been a calamity for animals, for the environment, for family farmers and for rural communities. Our nation has to find a way beyond those practices, through a combination of putting more traditional, family farmers on the land, getting animals out of extreme confinement, eating more plant-based foods, and perhaps, switching to the consumption of more tissue-cultured meat when it becomes commercially viable.

There won't be any single antidote to factory farming. But with it, society does have a major problem — and it calls for creative attention. Treating billions of animals like commodities, jamming them into small cages and crates, feeding vast amounts of grains to them, allowing them to generate massive amounts of waste or gases and driving family farmers out of business is neither humane nor sustainable.

We need a new way forward.

Pacelle's most recent Op-Ed was Step-by-Step Progress Protecting Tennessee Walking Horses. This article was adapted from the article Search Results: Cultured Meat and Horse Sense on the HSUS blog A Humane Nation. The views expressed are those of the author and do not necessarily reflect the views of the publisher. This article was originally published on LiveScience.com.