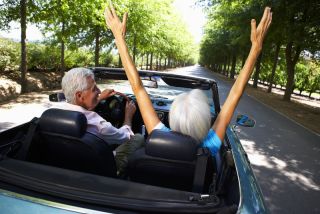 Question: Do we get sadder as we get older?

Answer: It seems that just the opposite is true. There's a lot of evidence that we get happier the older we get.

A Gallup telephone poll of 340,000 people across the U.S. showed that happiness comes with age. However, the poll didn't uncover the cause of this phenomenon.

Dr. Arthur A. Stone, a professor of psychology at the State University of New York at Stony Brook, was the lead author of a study based on the Gallup survey. He speculated on the causes for this happiness.

"It could be that there are environmental changes, or it could be psychological changes about the way we view the world, or it could even be biological — for example brain chemistry or endocrine changes," Dr. Stone told the New York Times in 2010.

The telephone survey included people between 18 and 85. The survey showed that people start out at age 18 feeling pretty good. However, they feel progressively worse until they hit 50.

But after that point, people begin getting happier as they age. By the time they are 85, they are even more satisfied with themselves than they were at 18.

Why are older people happier? I collected some theories. Older people are happier because they have:

A University of Chicago study also showed that happiness increases with age. The researchers asked a cross section of Americans how happy they were. The question was administered in face-to-face interviews of population samples that ranged from about 1,500 to 3,000.

The Chicago researchers theorized that older people are happier because with age comes positive psychosocial traits, such as self-integration and self-esteem; these signs of maturity could contribute to a better sense of overall well-being.

"Older people are better able to recognize what will bother them, and better able to negotiate their environment," said Susan Turk Charles, a psychologist at the University of California, Irvine.

One study looked at people's positive and negative emotions over the course of 23 years, and compared participants by age group. Researchers found that teenagers most frequently reported negative emotions, while octogenarians seemed to feel the least negative.