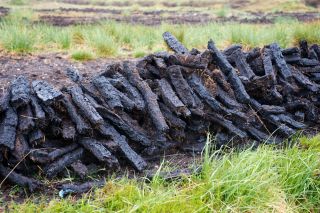 The peat bogs of Ireland are an iconic part of its rural landscape. But a fierce donnybrook has erupted over the harvesting of peat, known locally as turf cutting.

Recently enacted European Union regulations, as well as Irish law, ban the collection of turf from 53 peat-bog conservation areas, despite the centuries-old tradition of burning peat as a heat source.

A single brick-shaped piece of turf burns well for an hour, the BBC reports. And villages throughout the Emerald Isle are filled with the sweet smell of turf smoke wafting from chimneys. [Images: Reclaimed Medieval Wetlands]

Peat bogs are a type of wetland made up largely of dead and decaying vegetation. The ground is spongy and often impassable, making bogs unsuitable for most types of agriculture.

Bogs — sometimes called fens, mires or quagmires — are also home to a distinctive ecosystem. Dozens of plants and animals, uniquely adapted to life in peat bogs, are found nowhere else.

The bogs also hold a fascination for archaeologists: Because peat bogs are excellent environments for preserving organic material, they have yielded significant archaeological finds over the years, including the remains of hundreds of warriors from a bog in Denmark, and a timber structure older than Stonehenge in London.

But many conservationists are alarmed by the rapid disappearance of these wetland habitats. Almost 40 percent of Ireland's bogs were destroyed between 1995 and 2012, according to the BBC. And because peat takes a very long time to form, once the bogs are damaged, they can take up to 100 years to regrow.

For many Irish families, however, a ban on the harvesting of peat — a source of heat for some 20 percent of homes in Ireland — smacks of government interference in a traditional way of life.

"The EU and the environmentalists are imposing their value system on us. We've a right to live by our value systems — which we've done for generations and hundreds of years," Tom Ward, a native of Monivea in central Ireland, told the BBC.

The turf battle also raises the hackles of the Irish working class, whose economic opportunities were shattered by the recent housing crisis and banking fiasco.

"Bankers and politicians who wrecked the country were pensioned off with six-figure pensions and walked away," said Ward, who continues to cut turf despite the ban. "I'm being threatened with a six-figure fine and a three-year jail sentence."

Conservationists are quick to point out that the days of yeoman farmers cutting peat with hand tools are long gone: Today's peat harvesters use giant mechanical claws attached to large, rolling, tanklike machines to cut in one hour what would have taken weeks to harvest by hand.

But none of these arguments are likely to sway turf activists, including Luke 'Ming' Flanagan, former mayor of Roscommon, who was recently elected to the Irish parliament, largely on his opposition to turf-cutting restrictions.

"This is about our rights to use our land as we wish," Flanagan told the BBC.