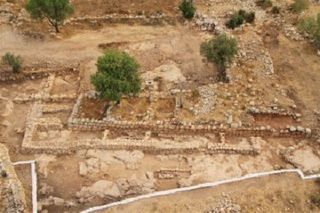 This aerial picture shows David's palace and the Byzantine farmhouse that was build on top of it.
(Image: © Sky View, courtesy of the Hebrew University and the Israel Antiquities Authority)

Archaeologists say they've uncovered two royal buildings from Israel's biblical past, including a palace suspected to have belonged to King David.

The findings at Khirbet Qeiyafa — a fortified hilltop city about 19 miles (30 kilometers) southwest of Jerusalem — indicate that David, who defeated Goliath in the Bible, ruled a kingdom with a great political organization, the excavators say.

"This is unequivocal evidence of a kingdom's existence, which knew to establish administrative centers at strategic points," read a statement from archaeologists Yossi Garfinkel of the Hebrew University and Saar Ganor of the Israel Antiquities Authority (IAA).

The IAA announced the finds as a seven-year long excavation at the site is wrapping up. The government agency and the Israel Nature and Parks Authority have halted the planned construction of a nearby neighborhood, hoping to make the site a national park. [In Photos: Archaeology Around the World]

Garfinkel has previously said Khirbet Qeiyafa could be the site of Shaaraim, a biblical city associated with King David in the Bible. Shaaraim means "two gates" and two gates have been found in the fortress ruins. Others researchers, meanwhile, have claimed this site might be Neta'im, another town mentioned in the book 1 Chronicles in the Old Testatment.

Prior radiocarbon analysis on burnt olive pits at the site indicated that it existed between 1020 B.C. and 980 B.C., before being violently destroyed, likely in a battle against the Philistines. Much of the palace was further wrecked 1,400 years later when a Byzantine farmhouse was built on the site.

The archaeologists found a 100-foot-long (30-meter-long) wall that would have enclosed the palace, and inside the complex they discovered fragments of ceramic and alabaster vessels, some of them imported from Egypt. The researchers say the building was strategically located to overlook the city and the Valley of Elah.

"From here one has an excellent vantage looking out into the distance, from as far as the Mediterranean Sea in the west, to the Hebron Mountains and Jerusalem in the east," the archaeologists said. "This is an ideal location from which to send messages by means of fire signals."

The excavators also found a pillared building measuring about 50 feet by 20 feet (15 m by 6 m) that was likely used as an administrative storeroom.

"It was in this building the kingdom stored taxes it received in the form of agricultural produce collected from the residents of the different villages in the Judean Shephelah," or Judean foothills, the archaeologists said. "Hundreds of large store jars were found at the site whose handles were stamped with an official seal as was customary in the Kingdom of Judah for centuries."