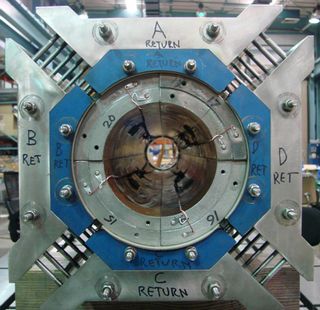 A powerful new magnet to replace existing ones in the world's largest atom smasher, the Large Hadron Collider, just passed its first test with flying colors.

The magnet, which allows the massive particle collider to study two to three times more proton collisions, could help unveil the mysterious properties of the newly discovered Higgs boson, an elementary particle that is thought to explain how all other particles get their mass.

The Large Hadron Collider (LHC) between Switzerland and France sends two proton beams barreling at near light-speed around 17-mile (27 kilometers) underground ring until they smash into each other, creating myriad subatomic particles in the process. [Beyond Higgs: 5 Elusive Particles that May Lurk in the Universe]

The new magnet produces a much larger magnetic field to focus the proton beams into an even more miniscule area, thereby ensuring that more protons crash into each other.

Right now, the Large Hadron Collider uses a magnet to focus the proton beams before they smash into each other. The farther the protons deviate off course, the stronger the magnet pulls them toward the center of the beam that's just a few thousandths of an inch wide. Though hundreds of billions of protons make up each beam, there are still relatively big empty spaces between them, meaning the odds of a collision are relatively small.

The current magnet is made of a superconductor called niobium titanium, which, when cooled to near absolute zero, allows large amounts of current to flow without overheating.

Niobium titanium was fine for simply discovering the Higgs boson, but revealing the properties of the Higgs boson requires more collisions than the LHC currently allows.

"The LHC is already designed at the limit of the technology," said GianLuca Sabbi, an accelerator physicist at Lawrence Berkeley Laboratory who helped design the new magnet. "So how do you make it better?"

The answer, it turns out, was to find a better superconductor.

One of the top candidates was niobium tin, which can produce a higher magnetic field and more current at higher temperatures.

But superconducting coils made of niobium tin are more brittle and therefore prone to moving in response to the huge forces generated as the magnet turns on. That, in turn, could release energy in the form of heat and cause the magnet to lose its superconductivity.

Higher-power magnets also cause more radiation of subatomic particles during collisions, which can damage the magnet more quickly.

To solve these problems, the team built a thick aluminum shell to support the niobium tin superconductor and prevent its displacement.

The new magnet and its housing can produce magnetic fields 50 percent stronger than the LHC's current magnet. That extra strength translates to two or three times the number of collisions, Sabbi said.

But the LHC has a bigger goal: Over 10 years, researchers plan to revamp the entire system to achieve 10 times as many collisions.

"The magnets are just one element of many changes that are going to be made in the machines," Sabbi told LiveScience.