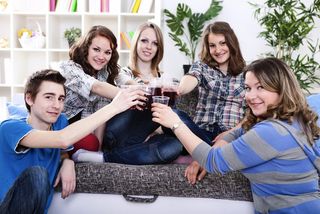 When college-age guys and gals are asked to describe how drunk one of their friends is, they tend to apply more moderate terms to women, even when females are heavily intoxicated, a new study reveals.

Researchers found that students are more likely to describe women's level of intoxication with words like "tipsy" or "buzzed," suggesting they've downed a moderate amount of alcohol, while men's drinking tends to be described in terms reflecting excessive consumption, such as "hammered," "trashed" or "wasted."

In other words, people of both sexes tend to express women's drinking in moderate terms.

"This is likely due to differences in social and gender norms for female drinkers compared to male drinkers," said study researcher Ash Levitt, a research scientist at the Research Institute on Addictions at the University at Buffalo, SUNY.

The drinking culture on campus may still make it seem that it is less acceptable for women to drink as much as guysdo, and women who drink a lot may be negatively perceived by other women and men — this may be why women downplay even heavy drinking by using terms like "tipsy" to describe themselves, the researchers suggest.

The results were published online today (July 10) in the journal Alcoholism: Clinical and Experimental Research.

In the study, researchers asked 145 college students to read a brief story of a situation involving four friends — two men and two women — celebrating the main character's birthday in a bar.

In each story, the researchers switched the sex of the main character, how much he or she drank, and how this person behaved. Study participants rated on a scale from 1 to 5 how well each of four moderate drinking terms (including "buzzed" and "tipsy") or 11 heavy drinking terms (including "obliterated" and "tanked") applied to the main character in the story. [7 Ways Alcohol Affects Your Health]

Participants correctly perceived whether the character was moderately versus heavily intoxicated, Levitt said. "However, moderate terms were applied more to female characters, even when they were heavily drinking," he said.

If college-age women underestimate both their own and other women's level of intoxication by using moderate, and perhaps more polite, terms to describe it, "then they may downplay the risky and potentially dangerous situations that could have very real, negative consequences," Levitt said.

For example, if a woman tells her friends she's feeling "tipsy," they may think it's safe for her to get behind the wheel. Or, she may overestimate her ability to fend off a potential sexual assault.

College-age men may face a similar increase in health risks, but for different reasons, Levitt pointed out.

"The fact that men tend to gravitate toward heavy terms more than moderate terms may reflect that men are influenced by norms for college drinking, such as how much other college men drink," Levitt said. Consuming large amounts of alcohol might be seen as a normal part of a male's college experience — an expected behavior for a guy and his buddies that's considered fun.

"Such behavior is not only misguided, but it also has dangerous consequences," Levitt said, adding that alcohol poisoning and rising rates of severe drinking problems in college students — both men and women — are some troubling trends.

The new results support the findings of a previous study by the same researchers that found similar differences in thelanguage choices used by both sexes to describe themselves after drinking, Levitt said.

The earlier research showed that college-age women tended to use words such as "light-headed" or "loopy" even after drinking heavily, and that guys were more likely to describe themselves as "smashed" or "plastered," regardless of the amount of alcohol they consumed.