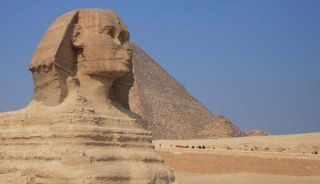 The Great Pyramid at Giza is both the oldest ancient wonder and the only one still standing today. It was built as a mausoleum for the pharaoh Khufu around 2650 BC and for over 4,000 years remained the world's tallest structure.
(Image: © Dreamstime)

Monty Dobson, inaugural scholar at the School of Public Service and Global Citizenship at Central Michigan University, writes the Monty's World blog and is producing the documentary America: From the Ground Up!. He contributed this article to LiveScience's Expert Voices: Op-Ed & Insights.

The collapse of Egypt's government in a coup d'état last week has left much of Egypt's antiquities in peril.

Even before Egypt's military overthrew the Islamist government of President Mohamed Morsi, the country's antiquities were under severe threat from looting and institutional corruption amplified by the political chaos that followed the Arab Spring.

According to Archaeology, the online publication of the Archaeological Institute of America, Egyptian archaeologists such as Monica Hanna have been sounding the alarm at the theft of Egypt's antiquities. Indeed, Hanna asserts that many foreign archaeologists have been complicit in the conspiracy of silence for fear of losing official permits that grant them access to these treasures. She also accuses the country's antiquities authority of willfully ignoring the crimes, if not of outright corruption. [Image Gallery: Egypt's Valley of the Kings]

Several recent news stories have highlighted the threats facing Egypt's antiquities, including an article in the Oct. 31, 2012, edition of The New York Times. The story, written by Farah Halime, suggested that the number of illegal digs was too large for Egyptian authorities to handle, even if they had the political will to do so.

The threat isn't limited to countries in political crisis. Indeed, according to the U.S. Department of Justice, the theft of cultural-heritage items and art ranks behind only drugs and arms in terms of the highest-grossing criminal activities. And it isn't only Egypt that is at risk. Cultural-heritage items from countries as diverse as Italy, the United States, Bolivia and the United Kingdom are routinely looted and then sold to the highest bidder.

The massive size of the market for looted items has attracted the interest of many unsavory types, ranging from organized criminal gangs to terrorist groups. Indeed, the United States Federal Bureau of Investigation (FBI) states that looted antiquities are a major source of funding for terrorist groups, including the Taliban and al-Qaida. FBI investigations in the aftermath of the Sept. 11, 2001, terrorist attacks concluded that one of the masterminds behind the attacks, Mohammed Atta, attempted in 1999 to sell looted antiquities to fund part of the attacks.

Many of these stolen items end up for sale online and in the catalogs of many supposedly legitimate auction houses. A quick perusal of the blog Looting Matters reveals the extent of the problem at some of the world's most prestigious auction houses. Other items end up for sale on online auction sites alongside an array of increasingly sophisticated fakes.

So what is the answer for museums and private collectors who wish to deal ethically? For starters, strict adherence to the 1970 UNESCO Convention on the Means of Prohibiting and Preventing the Illicit Import, Export and Transfer of Ownership of Cultural Property would be in order. In addition, it is incumbent on anyone buying an item to make sure to not buy either a fake or a looted piece. However, given the extent of looting and the sheer number of fakes on the market, the best advice is buyer beware.

The views expressed are those of the author and do not necessarily reflect the views of the publisher. This article was originally published on Live Science . Dobson's most recent Op-Ed was Obsessed with the Good and Bad of 'Vikings.'