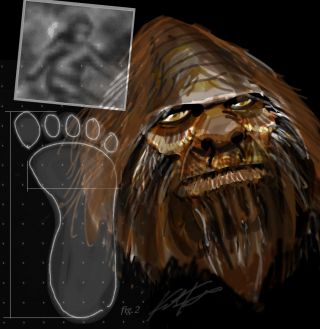 A Utah man claims to have found a fossilized Bigfoot skull, which he took to the local newspaper, in his trunk, to show off. Todd May of Ogden said he has seen live Bigfoot skulls — as in atop a live Bigfoot — so he ought to know what a fossilized one looks like. "I've been tracking and watching for Bigfoot," May told The Standard-Examiner in Ogden. "I'm very curious, interested in that, and wanted to get footage on it 'cause I've ran across him a couple of times."

May is not the first individual to claim having solid evidence of Bigfoot — others have produced blurry photos and videos and even a body. It’s worth noting that no previous claims have been substantiated by science. The newspaper sent a photo of May’s supposed skull to a paleontologist who gave a rock-solid assessment of the non-fossil: “Basically, it is just the odd way the rock has weathered."

In short, Todd May is in all likelihood experiencing pareidolia (par-i-DOH-lee-a), the common and sometimes cloud-based phenomenon of seeing faces in inanimate objects.