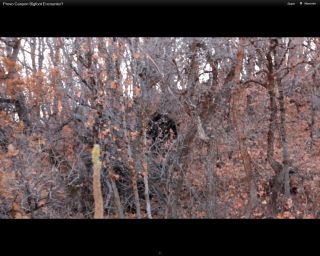 A screengrab from the video of the Utah "blobsquatch."
(Image: © YouTube | Beard Card)

A new video that seems to show a Bigfoot-like beast rearing up in a Utah brush patch is racking up millions of views on the web, but are there any compelling facts in the compelling footage?

Beard Card, the YouTube handle of the man who purportedly filmed the video while camping with his family, says he first hit "record" on his camera to document what he thought was a black bear hiding in the bushes. Indeed, the video's tranquil first half has an off-screen voice whispering, "Do you think it's a bear?"

But then the rustling black form in the bushes suddenly grows a few feet as it seems to stand to its full height, and the cameraman abandons his shot to make a desperate run to safety.

"We had actually been standing there for awhile. We had thought it was a bear up to that point, but when it stood up and looked at us, it was just a massive animal," Beard Card, who didn't want his real name made public, told Salt Lake City's Fox News 13.

The man says he and his fellow witnesses "are positive that thing wasn't a bear," due to its apparent size. But the creature's height is not obvious from the video and whatever it is, it seems to meet all the classic qualifications of what the Bigfoot community calls a "blobsquatch," an ambiguous, shadowy image that puts Bigfoot in the eye of the beholder. [Tracking Belief in Bigfoot (Infographic)]

Black bears rarely stand erect, but when they do, it's because something unusual in their environment seems to deserve a thorough investigation.

"A bear stands on its hind legs to get a better view and smell of the surroundings. This is not an aggressive posture, just a way to determine who or what piqued its interest," according to the Virginia Department of Game and Inland Fisheries' website.

Assuming that the subject of the new Bigfoot video is not an ordinary black bear that stood up to investigate a mysterious, mostly hairless primate roaming a remote area of Utah with a video camera, then another possible mundane explanation is that the video is a hoax, orchestrated either for kicks or publicity.

It was posted the day before Halloween, which may or may not be a coincidence. It also arrived a couple weeks before the premiere of the third season of the reality TV show "Finding Bigfoot" and shortly after the announcement of a competing show on the Spike network that will offer $10 million, the largest cash prize in television history, for irrefutable proof of Bigfoot. This information could be completely incidental, but in the age of covert viral marketing, skeptics might take note.

What is almost certainly not a coincidence is the fact that the largest cash prize in TV history is being offered as a reward for proving the existence of a hairy ape man that has never had any solid scientific evidence, or steady footage, to stand on.