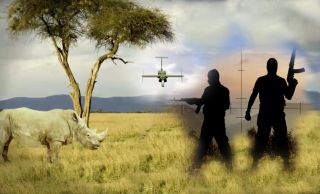 Airborne drones have gotten a reputation as bringers of death and destruction from the sky. But the World Wildlife Fund (WWF) is about to deploy such unmanned aerial surveillance vehicles, or UAVs, to protect endangered animals from poachers

No, the WWF isn't planning to shoot illegal hunters before they can shoot animals. Rather, the remotely piloted spy-panes will pinpoint potential poachers and report their positions to rangers. [9 Totally Cool Uses for Drones ]

Wild rhinocerous populations are among the first candidates for this protection. Illegal hunting is a serious and growing problem. Since the beginning of 2013, South Africa has lost 82 rhinos. Some 668 were killed in 2012 due to demand for rhino horn from Asia and certain Arabic-speaking nations.

WWF reports "a single shipment of ivory seized in Malaysia in December (2012) weighed almost as much as all the illegally traded ivory since 2011, which was itself a record year for seizures."

There are five main species of rhinoceros; all are prized for their horns.

In Southeast Asia and China, pulverized dried horn is dissolved in hot water as a supposed cure for arthritis, gout, rheumatism and high fevers. But recent medical studies have not confirmed any particular healing properties. The use of rhino horn as an aphrodisiac, though widely rumored, has not been authenticated and is probably apocryphal.

In North Africa, whole rhino horn is the preferred material from which to fashion dagger handles of importance to young men in some Muslim cultures.

Rhinoceros populations are native to Southern Asia and Africa. Both areas have enacted laws for their protection. As of this date, the WWF has not decided where to deploy its UAVs. And the technology can, of course, be applied to other animal species threatened by poachers.

The WWF program may not be the first to probe for poachers from the air. In 2012, then-Secretary of State Hillary Clinton tasked the U.S. intelligence services to track illegal hunters. The State Department's rationale seems to have been that illegal profits are often spent on other illegal pursuits; this underground animal trade was thought, therefore, to threaten national security.