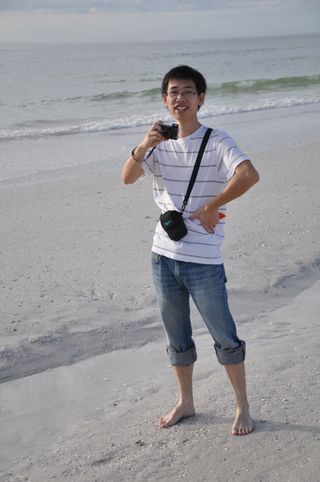 Storm surges from rising sea levels are important predicted consequences of global climate change and have the potential for severe effects on the vegetation of low-lying coastal areas. The unprecedented storm surge from Hurricane Sandy, for example, was enough to shift coastal shorelines along New York and New Jersey. The question of how these storm surges affect coastal areas can be addressed mathematically and is the focus of research by Dr. Jiang Jiang, a postdoctoral fellow at the National Institute for Mathematical and Biological Synthesis (NIMBioS).

I am interested in trying to understand our nature, especially ecosystem processes that involve species interacting with environments. Mathematical tools are my favorite approaches to understanding these complex interactions.

I forget when my father first told me to be consistent in doing what I choose. But his advice helped me choose my major, go to graduate school and do research. Doing research is lots of fun when you find something new, but you can easily get stuck on something in the middle of research, which can be really frustrating. His advice helped me calm down and be confident.

I like to do simulation experiments on crazy ideas. Using mathematical and computational approaches, I can set up hypothesized rules for the interactions of species. This is sort of like creating virtual nature.

Scientists don't replicate previous work. An effective scientist should apply critical thinking of past research. Then you might come up with innovative ideas.

Understanding our ecosystem processes can help restoration. For example, my research on the interaction processes of coastal vegetation and underlying groundwater salinity dynamics can provide tools for management. The model can predict habitat change of the coastal Everglades for given scenarios of sea level rise or storm surge. The scenarios assume salinity changes of groundwater, therefore changing vegetation through ecological-hydrologic processes. The model can also help in making assessments of the Comprehensive Everglades Restoration Plan, which aims to capture fresh water that now flows unused to the ocean and the gulf and redirects it to Everglades.

My middle school science teacher taught me not only science knowledge but also stories on how people become scientist, for example Newton, Darwin and Hawking. I started to read their stories and wanted to be a scientist too.

People are familiar with damage caused by hurricanes. One major cause of hurricane damage is storm surge, which causes significant flooding and costs people their lives if they're caught unexpected. However, storm surge can also have large long-term impacts, not just short-term damage. My research shows that storm surge can carry saltwater so far inland that it can alter groundwater salinity, known as salt intrusion, and can damage agriculture. Excessive saltwater could also cause vegetation shift from freshwater vegetation to salt-tolerant plants.