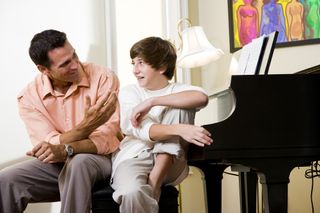 Lisa M.P. Munoz is Public Information Officer for the Society for Personality and Social Psychology and worked closely on this piece with Ronald Rohner, director of the Center for the Study of Interpersonal Acceptance and Rejection at the University of Connecticut, in contributing this article to LiveScience's Expert Voices: Op-Ed & Insights.

Dads are underappreciated, yet often get off the hook too easily. Just think — when a child misbehaves at school, who does the principal call, the mom or the dad? Chances are, the mom gets the call, as mothers, for better or worse, are usually most credited with their children's successes or failures.

Just last month, the head of my daughter's day care said he would hold an open meeting for "moms" to discuss a controversial school safety policy. No mention of dads — it was perhaps not an intentional distinction, but one that happens all the time. Even my mother-in-law lavishes praise on me, not her own son, for my daughter's every charm.

However, dads should be getting not only half the credit but, in some cases, more than half the credit. A growing body of research is finding that in families with both a mom and a dad, a father's love is just as powerful as a mother's, and in some cases more powerful, in shaping a child's personality and behavior. [10 Scientific Tips For Raising Happy Kids]

Research across every major ethnic group in America and hundreds of countries and societies worldwide has shown that people everywhere — regardless of race, language, gender or culture — respond the same way to love or rejection by the people most important to them growing up.

A recent article in the journal Personality and Social Psychology Review analyzed 36 studies involving more than 10,000 people around the world, and authors Abdul Khaleque and Ronald Rohner, both of the University of Connecticut, found that children who feel rejected by their parents tend to feel more insecure and anxious, and more hostile toward others. We feel that rejection — quite literally, as seen in neuroimaging — and relive it over and over again, making it more difficult to form trusting romantic relationships as adults.

Until recently, psychologists and the popular press alike looked primarily at how our moms shape our childhoods. As noted in an early paper on the topic in 1995 by Rohner,  even the phrase "father love" sounds strange to many people, with most taking comfort in "mother love." Rohner is hoping to change that tendency, however: His and others' work over the last few decades is putting the spotlight on fathers in heterosexual two-parent families. It's not to say that a mother's love is unimportant — it is vitally so, but fathers should not be overlooked.

As described in a 2001 paper by Rohner and Robert Veneziano, research to understand dad's role began in the 1960s and 1970s, when more women took jobs outside of the home. At this point, society started putting more pressure on fathers to take up some household duties, including child-rearing. (Just last month, the Pew Research Center reported that in U.S. families with children under age 18, the number of married mothers who earn more money than their husbands has jumped from 4 percent in 1960 to 15 percent in 2011, up nearly fourfold.) Since then, more than 500 studies have looked at how dad's role stacks up to mom's — implicating a father's love in everything from behavior problems in childhood to depression as adults.

A 2012 study of 206 university students in Karachi, Pakistan, found that those who perceived rejection from their fathers in their childhood had poorer psychological adjustment than those who perceived paternal acceptance. The researchers measured psychological adjustment through a questionnaire that asks participants about many factors, including hostility, self-esteem, dependency and worldview.

In a 2000 study conducted in China, researchers looked at conduct problems among 258 sixth-grade students. They found that lack of paternal — but not maternal — warmth predicted the youth's hostile behavior, while paternal warmth led to higher academic performance and social competence as judged by the children's teachers.

In a 1992 study of 285 married adult males who had two living parents, researchers found that only the father-son relationship, not the maternal relationship, related to the participants' anxiety and depression. Another study in 1993 found that conflict between fathers and children, versus between mothers and their children, was associated with depression in adolescence.

But why dads, and not moms, in those studies? Psychologists in 13 nations have been working together to answer that question. The International Father Acceptance-Rejection Project, which wraps up work this year, has been testing the idea that the level of perceived interpersonal power and prestige for each parent relative to the other parent within a family predicts the influence of a dad or mom. In other words, if children perceive that dad has more interpersonal power or prestige in the family than mom, his rejection or love tends to be more important in the child's development. Final results of the project will be coming out later this summer, and the results so far are exciting, Rohner says, pointing toward a more definitive answer on why dads' love is sometimes a much better predictor of offspring's psychological adjustment than is moms' love , and vice versa.

In the meantime, if you are a teacher or principal, don't be so quick to blame mom — get dad in on the conversation as well, and then make sure he gets some credit when the student does great things as well. And this Father's Day, make sure you show enough appreciation to all the dads you know so that they feel valued and loved, and then carry all that love through to their children.

The views expressed are those of the author and do not necessarily reflect the views of the publisher. This article was originally published on Live Science .