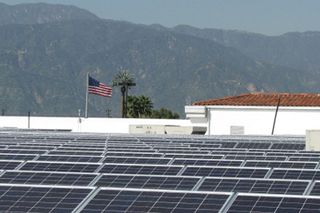 (ISNS) -- One hour's worth of global sunlight would be enough to power the world's energy requirements for an entire year. But even if humankind can someday harness solar power to meet global energy needs, there is another problem engineers will have to tackle: integrating solar power with existing electrical networks.

In a new review of existing research, published online in the Journal of Renewable and Sustainable Energy, scientists warn that this latter challenge will not be easy be-cause solar cells – also known as photovoltaic, or PV, cells – have numerous negative impacts on current systems used to distribute electrical power.

For example, one potential problem is keeping power systems balanced as PV cells enter the existing network so that the total amount of electricity generated is always equal to the amount of electricity used by the network, explained study coauthor Mohamed ElNozahy, an electrical and computer engineer at Canada's University of Waterloo.

If these two factors – total power generation and total load – are not kept balanced at all times, "severe frequency and voltage problems would occur," ElNozahy said.

"Right now, we don't face this power balance problem, as conventional generators are controllable to a great extent."

Solar power, on the other hand, is much more inconsistent. The amount of power generated by PV cells can change dramatically in response to unpredictable environmental factors such as cloud cover and temperature. Fast-moving clouds, for example, can reduce the electrical output of PV systems by up to 50 percent within a few seconds.

To compensate for solar power fluctuations, engineers currently incorporate fast but relatively expensive generators that perform frequency regulation services. These generators inject extra power into networks when fluctuations in PV output cause the generated electricity to dip below the desired frequency of 60 Hertz.

The use of solar power cannot be increased without also increasing existing frequency regulation services, ElNozahy said. "This will increase the cost of solar electricity, which is already much higher than other sources," he said.

Some experts predict that without increasing the number of frequency regulation generators in use, solar power won't be able to supply more than 5 percent of our current power demands.

One possible remedy to this problem is being pursued by ElNozahy and Magdy Salama, a professor of electrical engineering at the University of Waterloo and a co-author of the new paper.

Their solution involves developing a new "bilayer architecture" for the distribution of solar power that is composed of three basic components: an alternating current, or AC, layer, which covers the existing electrical grid, except for solar power; a direct current, or DC layer, that is dedicated to collecting solar electricity; and a “controlled inverter interface” that controls the power flow between the two layers.

The architecture will be challenging to adopt but "will ensure that solar electricity is completely decoupled from AC networks," ElNozahy explained.

As a result, power surges in the solar electricity, or DC, network will not affect the existing power grid.

Willett Kempton, a professor in the College of Earth, Ocean, and Environment at the University of Delaware who was not involved in the study, acknowledged that many of the challenges to solar power implementation highlighted by the review paper are real, but notes that some of them already have solutions or are relatively simple to solve.

For example, another problem highlighted in the paper is "islanding," which refers to the condition in which a power generator continues to produce electricity even after the electric grid has been shut down. Islanding is very hazardous to utility workers attempting to restore power and to equipment. As a result, utility companies prohibit equipment that does not prevent islanding.

ElNozahy and Salama argue that while techniques exist to detect islanding in PV systems, many of them have "nondetection zones" – that is, certain voltage and power values that fail to trigger a timely response.  Furthermore, these techniques would drive up the overall cost of integrating solar and electrical networks.

Kempton disagreed. "This is a solved problem," he said. "I am working now with an inverter that is totally reliable in detecting islanding ... and has no nondetection zones."

Kempton is very optimistic about the future of renewable energy, including solar power. In a study published in the Journal of Power Sources, he and his team predicted that a combination of wind power, solar power, and improved batteries and fuel cells could fully power a large electrical grid 99.9 percent of the time by 2030 at costs comparable to today's electricity expenses.

ElNozahy notes that the challenges he highlights in the paper are not unique to solar power.

"Wind power suffers similar problems," he said. "However, solar power is highly dependent on atmospheric conditions and thus, these problems are more significant for solar."

Ker Than is a freelance writer based in Southern California.