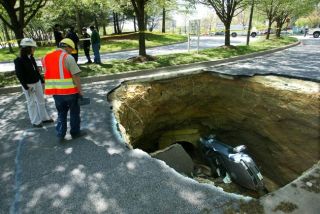 Beneath the lolling terrain of Kentucky, Illinois and Virginia lies chemically tortured bedrock that combines with farming practices to wreak havoc on drinking water.

Armed with electronics this past summer, Benjamin Schwartz drove his four-wheel-drive truck out to a field in McCoy, Virginia, during Hurricane Ivan to do battle.

First, he hooked his laptop and an electricity sensor to his truck battery. Then he sank metal pins into the ground and wired them up to create an electrical field under the soil.

Measurements of how and where electricity flows allowed him to create an underground map of precisely when and where flooding rainwater entered and pooled in hidden pits and fissures, called sinkholes, in bedrock beneath the surface soil, down to as deep as 15 yards. Hydrologists need to know how water flows in sinkholes because they lead to the deeper layers of limestone that store water.

You might think water enters sinkholes and flows to their lowest point, then flows down into the limestone aquifer, filling up like an underground glass of water.

Instead, Schwartz's initial findings are that the water enters the sinkholes higher up.

"I saw that rain wasn't just sinking like a sponge," he told LiveScience. "It was following flow paths in the soil. Essentially, not only is the bedrock underneath a sinkhole heterogeneous, so is the sinkhole itself."

The most damage from sinkholes tends to occur in Florida, Texas, Alabama, Missouri, Kentucky, Tennessee, and Pennsylvania. This sinkhole, seen from above, quickly opened up in Florida, apparently eating a swimming pool, some roadway, and buildings. Credit: USGS

He also found that water that usually takes weeks and months to move through the area was moving through in a matter of days. Schwartz hopes to measure the exact speed of the water later on.

Schwartz, a graduate student at Virginia Tech, also wants to run more experiments to model the flow of water in three-dimensions around a sinkhole. If he can figure it out, he'll be the first to understand how water flows through pesticide and fertilizer-laden farmland into an individual sinkhole and the first to have solid data for recommendations on how to manage farming practices to minimize the groundwater contamination.

Sinkholes form over time as acidic surface water finds a path of least resistance through limestone, which dissolves more easily than other rock, expanding joints and causing tiny fractures to grow at times into meandering underground caves. The surface soil above then suddently sinks, or craters.

Depending on where a sinkhole occurs, it can catastrophically swallow homes and buildings. Terrain that include sinkholes and related cave features are called karst landscapes.

Eventually, Schwartz hopes to generalize the study of water flow in a single sinkhole to other sinkholes. That information could be used to figure out how best to manage the agricultural use of sinkholes so groundwater contamination can be minimized.

"My goal isn't to say, stop using karst," Schwartz said. "I'm just trying to figure out if there's a way to manage the use of karst that will minimize the contamination."

Karst landscapes are more sensitive to pollution in some ways and less in others, says William Orndorff of the Virginia Department of Conservation and Recreation. He oversees the Department's Karst Project and has done research with Schwartz.

"Because karst systems can be thought of as a network of integrated pipes and tanks, the flushing of contaminants can be much quicker than, say, in a porous medium or fractured rock aquifer," Orndorff said in an email interview. "However, this also makes it more difficult to contain a spill since water can move up to several miles per day in a karst system."

Other contaminants tend to rest in sinkhole pockets for long periods of time, dissolving into groundwater.

"In the long run, such contamination could have dire consequences both for human consumption and for the habitats of cave-adapted, aquatic species, many of which are rare," he said, and found only in one location.

Orndorff is optimistic now that scientists are addressing the topic of karst and groundwater safety directly. "Ultimately, political will, technical proficiency, economics, and luck will determine to what degree the threat of karst groundwater contamination will be abated," he said.