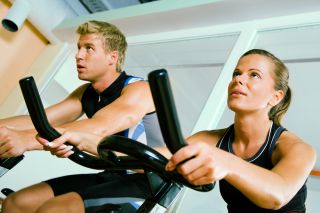 We've all heard the old expression about "working up an appetite," but what does that really mean? Can exercise actually sabotage your diet?

As the theory goes, we eat more food after exercising in order to replace the calories we burned. Not only does the old adage bring up a list of doubts about exercising as a means for weight loss, but it also offers an excuse to some lazy folks who choose to forgo exercise. Well, it's time for those lazies to listen up and take action, because a new study found that the old expression might be nothing more than a myth.

The Brigham Young University study showed that exercise won't cause an increased appetite, and it may even reduce food cravings. When participants didn't exercise, their brain waves suggested they responded to food images more strongly than when they were presented with the same images after 45 minutes of exercise.

This suggests that diet and exercise go hand-in-hand. Apparently, our bodies already know this. When we're taking steps toward health by exercising, not only do we gain muscle, but we also ditch some of those bothersome cravings. It's as if everything is working in harmony.

The women who participated in this study each took a brisk walk on a treadmill as exercise. Imagine what would happen if we kicked it up a notch. It's time to make a serious effort. Here are a few ideas to get you started.