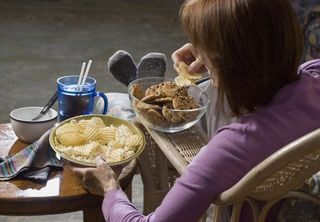 Thinking about your health before picking a food may make you more likely to make a healthy choice even if you don't think it's tasty, a new study shows.

Researchers from the California Institute of Technology conducted a brain-imaging experiment with 33 adult participants  who had fasted for at least three hours. While lying in a functional magnetic resonance imaging (fMRI) machine, each participant was shown images of 180 different food items, varying from chips and candy bars to apples and broccoli.

The participants, none of whom were following a specific diet or trying to lose weight, were given three seconds to respond to each image with a decision about whether or not they'd want to eat the food after the experiment was over.

Participants were able to respond "strong no," "no," "yes," or "strong yes" after they saw each food. After they viewed all of the images, a single image was chosen at random. If the volunteer had said "yes" or "strong yes" to the idea of eating that food, he or she was served it. [6 Easy Ways to Eat More Fruits and Vegetables]

To test whether food choices can be influenced by shifting attention toward health, the researchers gave participants one of three instructions: "Consider the healthiness," "Consider the tastiness" or "Make decisions naturally." After the fMRI testing, the subjects were asked to rate the tastiness and healthiness of the foods.

The researchers found that when the participants were instructed to think about healthiness, they were less likely to eat unhealthy food, even if they considered it tasty. They were also more likely to eat healthy food, including what they had rated as untasty.

The researchers already knew that everyone uses the same area of the brain, the ventral medial prefrontal cortex, when deciding what to eat, but the new scans revealed that a second brain area, the dorsolateral prefrontal cortex, comes to life when a person is using self-control during the decision-making process.

The researchers also found that being asked to think about healthiness led subjects to say no to foods more often than they did when asked to make decisions naturally.

The findings were published in the July 27 issue of the Journal of Neuroscience.