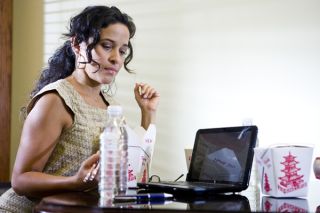 Americans might live a little longer if they cut back on the amount of time they spend sitting down, a new study says.

The study adds to a growing body of evidence suggesting that sitting itself is deadly. While previous studies have looked at the health risks to the individual, the new study examines the risk of sitting for the whole population, said study researcher Peter Katzmarzyk, of the Pennington Biomedical Research Center in Baton Rouge, La.

Other studies have found our culture of sitting may be responsible for about 173,000 cases of cancer each year.

Because U.S. adults spend, on average, between 4.5 and five hours a day sitting down, a significant shift in the population's behavior would be needed to have an effect on life expectancy, Katzmarzyk said. This might be achieved through changes at the workplace, such as the use of standing desks, and by watching less TV, he said.

Katzmarzyk and colleagues analyzed information from five earlier studies involving more than 167,000 adults that looked at the link between sitting and risk of dying from any cause over the next four to 14 years. The researchers also collected information from U.S. surveys conducted during 2005-2006 and 2009-2010, to calculate the amount of time Americans spent watching TV and sitting down daily.

About 27 percent of deaths in the studies could be attributed to sitting, and 19 percent to television viewing, the researchers said.

The study adds to the evidence suggesting that "in addition to being concerned about physical activity behaviors, we need to be concerned also about sedentary behaviors," said Mark Tremblay, a director of research at the Children’s Hospital of Eastern Ontario Research Institute, who was not involved in the study.

Because so many people sit for prolonged periods, the effect on the overall population is substantial, Tremblay said.

The researchers noted their study assumed a cause-effect link between sedentary behavior and risk of dying, which further research should validate, they said. In addition, the study relied on participants' own reports of sitting and TV watching time, which may not be entirely accurate.

The study is published online today (July 9) in the journal BMJ Open.

Pass it on:  Reducing sitting time to less than three hours a day may increase the U.S. life expectancy by two years, researchers estimate.