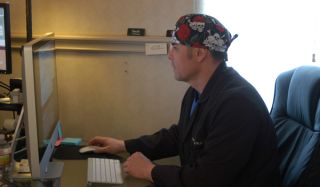 In the winter, a mountainous region of California that the locals call the Grapevine is plagued by severe weather. The highway that winds through it is coated with snow and ice, making travel between central and southern parts of the state difficult and, sometimes, nearly impossible.

During these stormy outbursts, Dr. Gregory Smith, who specializes in treating chronic pain and prescription drug abuse, can't make it from his office in Los Angeles to his Fresno clinic. Two years ago, his only options were to reschedule appointments or cancel altogether.

But now, Smith uses his computer webcam to "see" his patients. He estimates the video technology enabled him to save 350 to 500 appointments this year.

"It's almost as good as being there," said Smith, whose two clinics have more than 1,300 patients.

Web-camera doctor appointments have their benefits and their drawbacks. Free online video-chat services let doctors check in quickly with patients, which can be more convenient for both. They let sick patients keep their germs at home, rather than bring them to an office. And doctors in some specialties, such as plastic surgery, use the technology to extend the reach of their practices by having e-consultations with patients in far-away cities.

But nothing can replace real-life contact with a patient, doctors say. There are nuances to medical conditions that can be conveyed only during face-to-face interactions.

While the pros and cons of video-chats are debated, one thing seems certain: With technology creeping into more areas of our lives, the number of people making such appointments will only increase.

It's hard to quantify how many doctors now use webcams in their practices, because no agency tracks or requires doctors to report webcam use, said Gary Capistrant, senior director of public policy at the American Telemedicine Association (ATA).

But "it's absolutely increasing," Capistrant told MyHealthNewsDaily, "and now that you've got those 4G phones where you can videoconference from your cell phone, it's going to be much more common."

For some, the question is not whether to video-chat with patients, but rather how to strike a balance between video and real-life appointments.

Smith won't use a webcam or Skype software exclusively to see patients who are far away, and prefers to have at least a few in-person appointments before agreeing to a webcam visit.

But the technology is useful for quick check-ins if a patient doesn't have an appointment, he said.

"If there's some pressing event, it's so convenient that you can say, 'I'll just Skype this guy for five to 10 minutes,'" Smith said. "Then, you can solve the problem right there instead of having to make another appointment."

Under current laws, doctors must be licensed in other states if they are seeing patients outside of their home state on a more-than-occasional basis, according to the ATA.

But as technology becomes more advanced , gray areas in the laws are likely to grow, Capistrant said, and doctors will need to be increasingly aware of medical laws in other states.

To practice medicine right now even over a computer a doctor must be licensed in the state where he or she is physically located, as well as in the state where the patient is located, he said. But many doctors are licensed in more than one state, and some states have agreements with others to accommodate doctors who see patients across state lines, Capistrant said.

Doctors also have to make sure their communication is secure and encrypted in some fashion in order to abide by the Health Insurance Portability and Accountability Act (HIPAA), which ensures patient privacy, Capistrant said.

"Doctors should inform the patient of what's involved and disclose any risk, but the patient is ultimately the one who can decide ... the level of protection they want on their medical information," Capistrant said.

Further, video appointments may change the way doctors bill their patients. Currently, doctors can charge patients the same price for an in-person appointment as an Internet appointment. But as technology shortens the length of appointments when they last, perhaps, only as long as it takes to answer a question with a text message the system will need an update, Capistrant said.

In the future, rather than micromanaging every appointment and procedure, he said, doctors may bill patients a single monthly fee that covers office appointments, webcam chats, e-mails and texts.

Risks to both the quality of care and patients' privacy rise when doctors use Skype to communicate with their patients, said Dr. Stuart Gitlow, an associate clinical professor at Mount Sinai School of Medicine in New York City.

Doctors have to be sure they aren't being lazy when using the Internet to see patients, said Gitlow, who started using a webcam in his psychiatry practice about three years ago. A doctor who relied mainly on webcam appointments, for example, would be doing patients a disservice, he said.

"It can't be a routine thing," Gitlow told MyHealthNewsDaily. "People really have to recognize that it's very different if someone comes from Connecticut to see me, versus my Skyping with them while they're in Connecticut."

Quite a few of his psychiatric patients have panic disorders, or develop anxiety when interacting in settings like a doctor's office. For those people, the prospect of an Internet appointment can help them feel at ease and provide Gitlow with contextual information about his patients.

"I can see the person and the room they're in, and you could even make the argument that I'm getting to see them in their own domain," he said. "I can see what they're wearing, if they're functional, taking care of the place. I get a perspective I don't get in the office."

However, there are still some things that can only be garnered from an in-person visit, Gitlow said. He requires his patients see him face-to-face for most of their appointments.

Using a webcam is "something that's an issue of convenience for a given patient, who I've already established [a] relationship with in-person," he said.

The patient's side of the webcam

Earlier this year, Aaliyah White, 24, an assistant to a sports agent in Providence, R.I., decided she wanted filler injected into the right side of her lips and in laugh lines around her face .

Her Internet research to find a doctor led her to a YouTube video of Dr. Michael Escobedo, of Escobedo Esthetics in Austin, Texas, performing a cosmetic procedure on a patient from start to finish. Impressed by his skill, White called his office she was willing to fly to Texas for a consultation, just as she previously flew to meet a Utah plastic surgeon for a breast augmentation.

But Escobedo offered her a webcam appointment. An assistant in Escobedo's office gave White a time to log on to Skype, and soon she and Escobedo were face-to-face. [Story Continues Below]

"Before I even started talking, he said, 'I'm already seeing some of the problems that you want fixed,'" White told MyHealthNewsDaily. "He said, 'You probably want some filler on the right side of the lip, and the laugh lines.' He hit it, and he was on."

Escobedo started doing webcam consultations at the start of this year, and has found they've expanded his reach. He now does about two Skype consultations a week with prospective patients, many of whom live in New York City or Los Angeles.

"Patients would say, 'I wish I could see you, I wish you could see what I'm talking about,'" Escobedo told MyHealthNewsDaily. "It gives me a chance to see them and I can tell them, 'That's probably not something you want to do' or 'You should do it.'"

Internet consultations also let him give more accurate price estimates for procedures. And they make it easier to follow up with the patient to see if the lift or injection has gone well, he said.

Online video messaging has uses beyond the private practice. Dr. Thomas Lee, a pediatric ophthalmologist, uses Skype to help train doctors in Armenia to treat a rare eye condition called retinopathy of prematurity (ROP), a condition in premature babies that leads to blindness.

In the United States, ROP has only been known since the 1940s, when incubators and neonatal intensive-care units (NICUs) became prevalent and allowed premature babies to live past a single breath, said Lee, who works at the Vision Center at Children's Hospital Los Angeles.

In less developed countries, incubators and NICUs are only now becoming a reality, so doctors there are seeing ROP for the first time.

Lee traveled to Armenia last summer to help train them. During the visit, he and his team left behind two retina cameras that can take close-up pictures of babies' eyes. Now, doctors there send retinal photos to Lee via Google Documents to verify cases of ROP.

Lee and the Armenian doctors also meet weekly on Skype, he told MyHealthNewsDaily.

"They take [a photo with] the retina camera, we evaluate and make a decision to treat," Lee said. "If the decision is to treat, then they do the laser treatment. And then after that, they e-mail us a picture post-treatment of what that looked like, so we can tell them if they were complete in their treatment."

"It's a way for this country and the expertise in this country to assist medical education in foreign countries without leaving our home institution," he said.

Pass it on: Doctors are turning to online video messaging as another way of meeting their patients' needs, but medical, legal and economic challenges lie ahead as this practice becomes increasingly common.